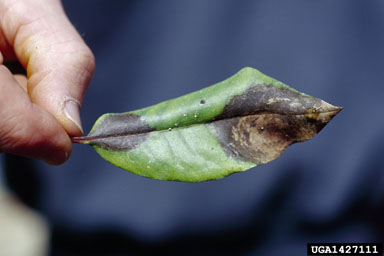 Since the early 1990s, oaks and tanoaks have been dying in the coastal counties of California. Since then, other types of plants have been found to be infected or associated with this disease, referred to as Sudden Oak Death (SOD), ramorum leaf blight or ramorum dieback. Phytophthora ramorum is a harmful pathogen that can cause mortality in several oak tree species and also causes twig and foliar diseases in numerous native and non-native ornamental plants, shrubs, and trees within the United States.

Sudden Oak Death was first reported in 1995 in Mill Valley (Marin County) on tanoak. Since that time, the pathogen has been confirmed on various native hosts in fifteen coastal California counties (Marin, Santa Cruz, Sonoma, Napa, San Mateo, Monterey, Santa Clara, Mendocino, Solano, Alameda, Contra Costa, Humboldt, Trinity, Lake, and San Francisco), and in Curry County, Oregon. Through ongoing surveys, APHIS-PPQ continues to define the extent of the pathogen’s distribution in the US and limit its artificial spread beyond infected areas through quarantine and a public education program.