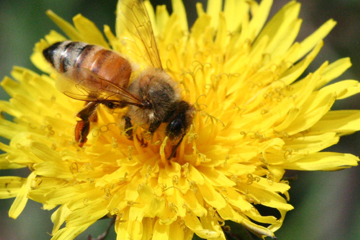 The European honey bee (Apis mellifera) is known for its importance for honey production. In addition to honey production, A. mellifera is the most commonly used species as a pollinator in the U.S. Honey bees are managed and used to pollinate over 100 crops grown commercially in North America. Although there are many hobbyist beekeepers, commercial beekeepers are responsible for providing the majority of pollination services to growers. Bumble bees ( Bombus), leafcutting bees ( Megachile rotundata), and to a lesser extent alkali bees (Nomia melanderi) and mason bees (Osmia spp) are also managed for use as pollinators in the U.S (National Resource Council of the National Academies 2007) .

After the large-scale, unexplained losses of managed U.S. honey bee colonies during the winter of 2006-2007, investigators identified a set of symptoms that were termed colony collapse disorder, or CCD. During the past two years, numerous causes for CCD have been proposed, but it now seems clear that no single factor alone is responsible for the malady. To date, researchers have documented elevated pathogen levels and a wide array of pesticides present in wax and pollen in both CCD-affected and non-affected apiaries, with none linked definitively to CCD. Additionally, tests for known honey bee parasites (Varroa mites, honey bee tracheal mites, Nosema spp.), which have posed significant problems for beekeepers and were once highly suspected to play a major role in CCD, have not found these parasites, by themselves, at sufficient levels to explain the problem. Thus, the cause of CCD is still unknown, but research is beginning to lend credence to the hypothesis that CCD may be a syndrome caused by many different factors, working in combination or synergistically; a prime example is the finding that varroa mites can vector viruses to honey bee colonies, of which elevated levels are highly associated with CCD. Some studies are focusing on combinations and synergistic effects of factors, such as the synergistic effects of Nosema and pesticides, and of pesticides and other pathogens, and will continue based on the groundwork being laid (USDA CCD Steering Committee 2009).