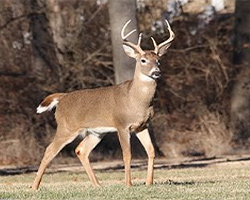 Chronic Wasting Disease (CWD) is an infectious, degenerative disease of animals in the family cervidae (elk, deer, and moose, etc.) that causes brain cells to die, ultimately leading to the death of the affected animal. First recognized in Colorado in 1967, CWD was described as a clinical 'wasting' syndrome of unknown cause. It later became clear that CWD was a member of a group of diseases known as transmissible spongiform encephalopathies or TSEs. TSEs include a number of different diseases that affect animals or humans, including bovine spongiform encephalopathy (BSE or “mad cow”) in cattle, scrapie in sheep and goats, and Creutzfeldt-Jacob disease (CJD), variant CJD, Kuru, fatal familial insomnia, and Gerstmann-Straussler-Scheinker syndrome in humans. Unlike other infectious diseases, TSEs are not caused by bacteria or viruses, but rather by a naturally occurring protein, that when folded incorrectly, becomes both infectious and deadly. The prion protein in its normal state is thought to have a role in functions such as cell signaling and neuroprotection. It is still unclear what initially causes the normal shaped protein to misfold into the infectious form. Once misfolded, the infectious prion proteins continue to convert more and more normal prion proteins to the misfolded form. Misfolding of prion proteins in the brain leads to the death of neurons (brain cells) resulting in dysfunction in the body, ultimately causing death. The incubation period can be long (several months to years) depending on species and genetic factors, and infected animals are in good body condition until the end stages of the disease, making them difficult to distinguish from healthy animals.

Unfortunately, animals infected with CWD can transmit the disease to other animals during the “silent” incubation period.

In the final stages of disease, animals become thin, drink and urinate excessively, have poor balance and coordination, lack body fat, have drooping ears, and difficulty swallowing (which is responsible for the classic drooling associated with the disease). Inability to swallow leads to aspiration pneumonia and death. Currently there is no cure or preventative measure, such as a vaccine, available for CWD. Other disease may present in a similar manner so post mortem testing is required to verify disease.

Since its discovery in 1967 CWD has been found in a number of states, Canadian provinces, Korea, and Norway, in both wild and farmed populations.

The goal of the APHIS National CWD Voluntary Herd Certification Program is to provide a consistent national approach to control the incidence of CWD in farmed cervids and prevent the interstate spread if CWD. Cervid herds must participate in the program and be certified to move animals interstate.