Cattle Fever Ticks (Rhipicephalus (Boophilus) annulatus and R. (B.) microplus) (CFT) are important parasites of cattle due to their ability to vector Bovine babiesiosis and anaplasmosis . The cattle fever tick eradication program was started in 1906 and today CFT are somewhat confined to a permanent quarantine zone that runs from Brownsville to Del Rio, Texas along the Mexican border. Mounted tick patrols (tick riders) help to apprehend and treat stray animals that may wander from Mexico. The Cattle Fever Tick Eradication Program works fervently alongside their partners at the Texas Animal Health Commission to systematically detect, treat, and eradicate tick infestations. Other populations of Cattle Fever Ticks are found in Puerto Rico and the U.S. Virgin Islands. More information on Cattle Fever Ticks and some of their current treatments can be found at these websites: 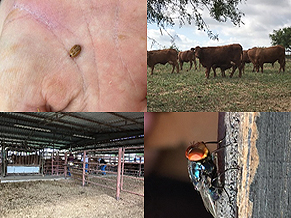 In August 2017, a population of Asian longhorned ticks (Haemaphysalis longicornis) was first found in the U.S. outside of a quarantine facility. It is a known serious pest of livestock in the Australasian and Western Pacific Regions where it occurs. It is an aggressive biter and frequently builds intense infestations on domestic hosts causing great stress, reduced growth and production, and exsanguination. As the tick can reproduce parthenogenetically (without a male), a single fed female tick can create a population. It is also a known/suspected vector of several viral, bacterial and protozoan agents of livestock and human diseases. U.S.-collected Asian longhorned ticks have now been shown to vector Theileria orientalis Ikeda in the laboratory to calves.

In 2016, the United States had its first outbreak of New World Screwworm (NWS) in over 30 years. The NWS fly’s larval (maggot) stage feeds on the living tissue of warm blooded animals. The larvae were found infesting the endangered key deer in the Florida Keys prompting a multiagency response involving the release of sterile flies. More information on the fly, response, and lessons learned can be found here.

Bont and Tropical Bont Ticks (Ambylomma hebraeum and Amblyomma variegatum) Both ticks have large mouthparts that result in large, painful wounds. They are also vectors  of Heartwater, a bacterial disease caused by Ehrlichia ruminantium.  The tropical bont tick may serve as a vector for Nairobi sheepdisease (NSD), a virus (family Bunyaviridae) which primarily affects sheep and goats in East and Southern Africa. People may contract NSD, but it causes only a mild, influenza-like illness. Additionally they may vector Dermatophilosis which is a skin disease caused by the bacterium Dermatophilus congolensis. Standard operating procedures for NSD, Heartwater, and bont ticks may all be found here.