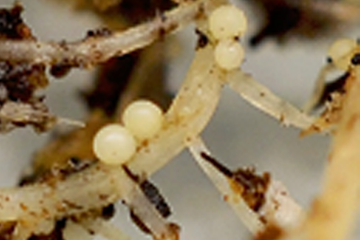 The pale cyst nematode, Globodera pallida, is a major pest of potato crops in cool-temperate areas throughout the world. In North America, the nematode is present in a small area of Idaho and the island of Newfoundland, Canada. It primarily affects plants within the potato family including tomato, eggplant, pepper, and some weeds. If left uncontrolled, collectively, potato cyst nematodes, including G. pallida can cause a 20-70 percent yield loss in potato fields. Pale cyst nematode infestations may be associated with patches of poor growth in potato fields. At high nematode populations, affected potato plants may exhibit yellowing, wilting or death of foliage - none of which has been observed in Idaho potato fields. No losses in potato yields have been documented for G. palllida in Idaho as in other countries because the infestation was detected and addressed before the pest level could reach the threshold for significant crop yield loss. Early detection of pests minimizes agricultural production costs and enhances product quality and marketability.