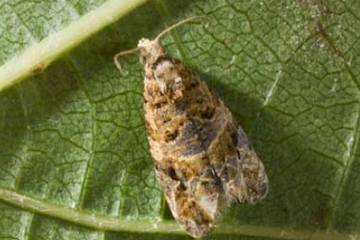 Lobesia botrana (L. botrana) or European grapevine moth (EGVM) is a significant pest of berries and berry-like fruits in Europe, the Mediterranean, southern Russia, Japan, the Middle East, Near East, and northern and western Africa.

From 1986, surveys for this pest occurred throughout the United States without any detection. In the fall of 2009, a new detection of EGVM was found in California which represented the first time the pest had been found both in the U.S. and in North America. Survey activities determined that EGVM was present in several counties within the grape growing regions of central California. APHIS, California Department of Food and Agriculture (CDFA), University of California Extension Service and various County Agriculture offices worked together to detect, delimit, and eradicate this pest. In August 2016, APHIS declared EGVM eradicated from the State of California, removed all areas under quarantine, and removed restrictions on the movement of EGVM host material.  Following the declaration of eradication, the EGVM Program transitioned to a post-eradication and response plan.