Plague in the United States 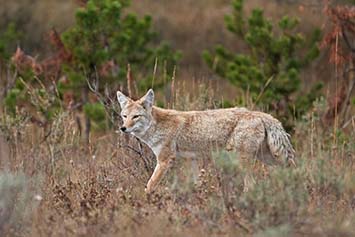 The Wildlife Services’ (WS) Plague in National Wildlife Disease Program (NWDP) monitors plague activity in wildlife. Between 2005 and 2018, WS and its partners collected approximately 45,000 blood samples from wildlife across the western United States. By analyzing these archived samples, WS-NWRC researchers and the NWDP documented plague exposure in 18 wildlife species, including coyotes, bobcats, and black bears. Approximately 9% of the 35,866 coyote samples tested positive for plague antibodies. Fourteen percent of the gray wolf samples (n=551) and 11% of the black-tailed prairie dog samples (n=32) tested positive. New Mexico, Wyoming, and Utah had the highest prevalence of plague in the wildlife sampled.

“We found that plague activity is widespread, with positive animals detected in every western state in the contiguous United States,” states NWDP assistant coordinator and former NWRC research wildlife biologist Dr. Sarah Bevins. “Being able to conduct such a comprehensive study is rare. Wildlife Services’ Tissue and Serum Archive, which has extensive sample collections from multiple locations and years, made this study possible.”

Results support the use of predators, such as coyotes, as sentinel species to track plaque occurrence on the landscape. Despite their relatively limited contribution to transmission, using predators as sentinels is beneficial because (1) they do not typically succumb to plague infections and therefore are available to sample, (2) they develop long-lasting antibodies that leave a record of Y. pestis exposure, and (3) they move over larger areas compared to the plague-positive rodents that make up part of their prey base, essentially sampling the environment and providing a broad indication of plague activity on the landscape.

“The use of such large datasets, combined with recent advances in our understanding of plague dynamics and ecology, offer us a better understanding of the risks this disease poses to wildlife, domestic animals and people,” concludes Bevins.