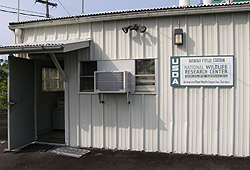 The Hawaii field station was established in 1967 to conduct research to reduce rodent depredation in Hawaiian agricultural crops, particularly sugarcane and macadamia nuts. Biologists at the Hawaii field station conduct laboratory and field studies to develop biological and ecological data needed for more effective use of new and existing methods to control rat damage. They study the biology and impact of rats, as well as evaluate the efficacy and safety of control techniques. In addition to addressing wildlife problems in agricultural crops, station biologists are also involved in applying the knowledge and techniques gained in agricultural settings to develop appropriate methods and tools for controlling rats in native ecosystems.

Further information about the research conducted at the Hilo, HI Field Station can be found on the Methods and Strategies to Manage Invasive Species Impacts to Agriculture in Hawaii Research Project page.

The station was funded by a congressional appropriation in response to concerns raised by the Hawaiian agricultural industry concerning rat damage losses. For example, at the time the station was established, it was estimated that rat damage to sugarcane resulted in the loss of 45,000 tons per year, an amount worth $5 million. The macadamia nut crop was also impacted by rats, with losses estimated at more than $400,000 per year.

The field station's mission, then, at the time of establishment, was to research and develop methods to alleviate rat damage to agricultural crops. Field station personnel often worked closely with members of the Hawaiian Sugar Planters' Association (HSPA).

Early work at the field station centered on ways to reduce rat damage to sugarcane. Protocols were established to test standard, and possible new, lethal agents. Scientists evaluated the acceptance and efficacy of treated baits and carriers. Studies on basic rodent biology and sugarcane damage characteristics were also undertaken.

In cooperation with the HSPA, scientists initiated studies to evaluate the use of zinc phosphide oat baits to reduce rat damage in sugarcane fields. Zinc phosphide was the first rodenticide (1970) registered in the United States for in-crop use. The baiting program was eventually operationally adopted by both Hawaiian and Floridian sugarcane growers. Also, during this period, sampling protocols and models were developed to quantify damage distribution and yield losses.

New wildlife damage problems were also emerging in Hawaii at this time:

Due to falling sugar prices, stiffer environmental requirements, and rising land, labor, and operational costs, the Hawaiian sugar industry was faced with major belt-tightening decisions, and many plantations closed. By 1998, only 4 plantations remained. Vacant sugarcane fields were gradually replaced with a variety of other agricultural crops.

Additionally, the field station, in coordination with state and other federal agencies, conservationists, and private landowners, worked to develop control strategies for reducing rat depredations in native conservation areas. Studies were also initiated to support registration of diphacinone rodenticide baits in Hawaiian forests.

The Hawaii field station continues to have a major role in research to address existing and emerging invasive vertebrate problems in the region. For example, extensive screening of lethal agents (as well as other control research) is being conducted to reduce the rapid spread of and island colonization by recently introduced Caribbean tree frogs

Also, ongoing studies in Guam aim to develop control strategies for the brown treesnake to reduce its population on the island and prevents its spread elsewhere.