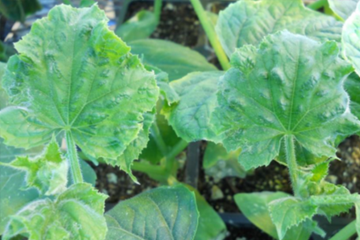 Tobamoviruses can cause severe crop diseases and result in significant economic losses in a wide range of plant species.

Cucumber green mottle mosaic virus (CGMMV) was first described in the United Kingdom in the 1930’s as Cucumber virus 3. It has since spread among cucurbit crops in many places in the Eastern Hemisphere, causing significant economic losses.

The virus can be transmitted in seed and spreads easily when healthy plants come in contact with contaminated equipment, hands, clothing, or infected plant material. CGMMV was first reported in the Western Hemisphere in 2013 with detections in Canada and the United States. CGMMV is considered transient and under official control in the United States.