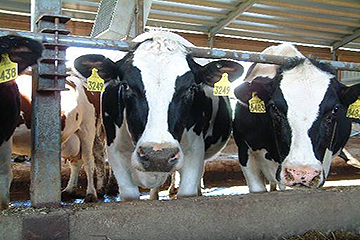 Tuberculosis (TB) is a contagious disease of both animals and humans. It is caused by three specific types of bacteria that are part of the Mycobacterium group: M. bovis, M. avium, and M. tuberculosis. Bovine TB, caused by M. bovis, can be transmitted from livestock to humans and other animals.  Once the most prevalent infectious disease of cattle and swine in the United States, bovine TB caused more losses among U.S. farm animals in the early part of the 20th century than all other infectious diseases combined.

Information about the Program

The National Tuberculosis Eradication Program, which is administered by the U.S. Department of Agriculture's (USDA) Animal and Plant Health Inspection Service (APHIS), State animal health agencies, and U.S. livestock producers, has nearly eradicated bovine TB from the Nation's livestock population since the program's inception in 1917. The presence of bovine TB in humans has also been reduced as a result of several factors, including the eradication program and pasteurization of milk.  Many consider this one of the great animal and public health achievements in the United States; however animal health officials continue to detect TB sporadically in livestock herds.

Signs and Symptoms of Tuberculosis

Cattle and bison usually show no clinical signs to TB unless the disease has affected multiple organ systems and is very advanced which is quite rare. Typically, infected cattle are asymptomatic and are only detected by skin testing or at slaughter during our national slaughter surveillance program.

How Tuberculosis is Spread

TB is spread mostly either by inhalation from nose to nose contact between animals or by ingesting contaminated feed or water. Herds are usually affected by one of two ways: either by purchasing infected animals or being exposed to infected cattle or wildlife. A third way of possible transmission may be human to animal transmission, but regulatory officials are unable to quantify this risk at this time.

Prevention and Eradication of Tuberculosis

The prevalence of TB in cattle, bison and captive cervids is extremely low in the US occurring roughly 7 times per 1 million cattle herds on an annual basis. Producers can reduce their risk of getting the disease by adding only test negative livestock from known negative herds to their own herds. When TB is found in a herd, it is eliminated by either depopulating the affected herds or by testing and then removing reactor animals from affected herds.

What to do if you Suspect Tuberculosis in Your Herd

If you suspect TB then contact your local accredited veterinarian who can give advice and then apply the appropriate test to diagnose TB.

The primary source of TB surveillance is carcass inspection at all federal and state inspected slaughter establishments. The other main sources of TB detection are by testing animals during traces, pre-movement tests and finally for accredited free herd status. Live animal testing is performed by using a screening test followed by a confirmatory test if the first test is positive.  Contact your local accredited veterinarian  for more specific information.

In 1917, the US Bureau of Animal Industry began the national TB eradication program due to human and livestock concerns regarding bovine TB. It started out as strictly an eradication program for cattle but eventually included both bison and cervids. Benefits from the program are estimated at 12X the cost of the program due to decreased slaughter condemnations and decreased human infection. Although the program has been extremely successful in reducing livestock infection, there is still work left to do. 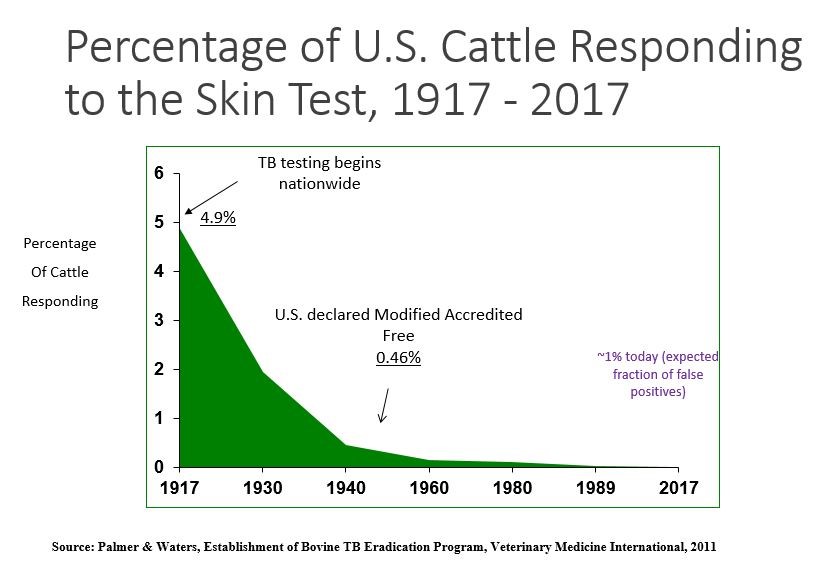 The VS Cattle Health Program conducts reviews of State Tuberculosis Eradication Programs bi-annually. VS reports and the corresponding State responses will be posted to this page as they become available.