Constant Vigilance
In late July 2021, APHIS’ Plum Island Animal Disease Center (PIADC) confirmed the presence of African swine fever (ASF) in the Dominican Republic. In September 2021, neighboring Haiti also reported ASF. APHIS is assisting both countries in addressing the outbreaks by helping with laboratory operations, testing, emergency response, and other support. The Agency and its partners have also ramped up biosecurity and preparedness in the United States and its territories to prevent ASF from breaching our defenses.

This support aligns with APHIS’ previous work on campaigns to stamp out ASF in the mountainous island of Hispaniola, home to the Dominican Republic and Haiti, in the early 1980s. Those efforts—and continual safeguarding and preventive measures—have kept this highly contagious and deadly virus, which still has no cure, treatment, or vaccine, out of the United States for 40 years. 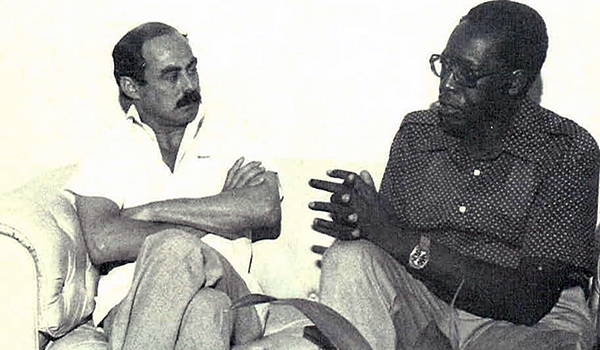 ASF spread from Africa and European nations in the 1960s and 1970s and arrived in Brazil in 1978. That year ASF also entered the Dominican Republic, probably via infected pork scraps from an international flight. Farmers’ use of garbage as swine feed likely spread ASF within the Dominican Republic. Initially, Dominican authorities mistook the disease for hog cholera, which is endemic to Hispaniola. They sent specimens to APHIS’ PIADC, which confirmed ASF on July 5, 1978. At that time, the Dominican Republic did not have an in-country system to handle emergency animal disease outbreaks, so it took a year to start the ASF eradication campaign. Unfortunately, by that time the virus had killed nearly half of the country’s 1.4 million pigs.

ASF also spread from the Dominican Republic into Haiti. PIADC confirmed the presence of the deadly virus there in January 1979.

Brigades to the Rescue 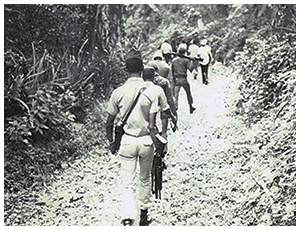 Rather than controlling the outbreak with quarantine and focused slaughter, the Dominican Republic decided to slaughter the remainder of its swine population. In August 1979, more than 90 “brigades” sprang into action. Each brigade consisted of 5 to 10 veterinarians, soldiers, field workers, government appraisers, and other animal health personnel. APHIS played a critical role by helping train veterinarians and supporting public information campaigns to overcome public fears and debunk rumors about eradication efforts. 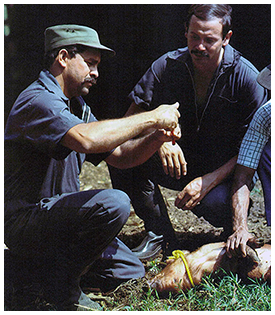 Dominican officials set up a compensation program. Those with healthy pigs could have them butchered for immediate consumption or be compensated. After the swine had been destroyed, the brigades returned to the owners’ premises, where they cleaned, disinfected, or burned animal pens. Smaller brigades confiscated illegal swine or pork products. By September 1980, the Dominican Republic had destroyed all domestic swine throughout the country, and other parts of the eradication campaign were also underway. Three months after the last pigs were killed, susceptible swine from the United States were introduced as ‘sentinels’ in free areas to test whether the virus was still present. After those animals remained healthy for 3 months, the government began restocking efforts. Using a similar process, Haiti eliminated its swine population and eradicated ASF in 1984.

Want to learn more? Check out the “From Beagles to Biotech: APHIS in the 1980s” StoryMap.