A Daunting Foe
It was 1980—the start of a new decade. In California, the year also marked the beginning of a series of Mediterranean fruit fly (Medfly) infestations, the size and scope of which the State had never experienced before. While new Medfly introductions would continue into the 1990s, none equaled the 1980-1982 outbreak. 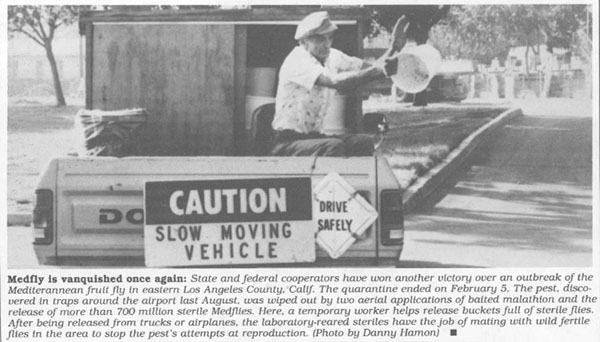 The Medfly is one of the world’s most destructive pests, attacking over 200 fruits and vegetables. In June 1980, it was discovered in two highly populated urban areas in the Santa Clara Valley of northern California. APHIS and the California Department of Food and Agriculture (CDFA) began eradication activities within days. However, the overall eradication program lasted more than 27 months—and APHIS and CDFA needed to adjust and adapt their methods along the way to achieve success. 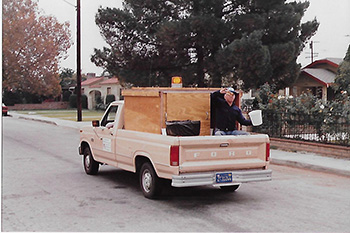 For example, APHIS and CDFA initially deployed sterile Medflies with the intent that they would mate with the invading flies, resulting in zero offspring and, in turn, population collapse. However, Medfly sterile release technology was still in its early stages, so it was difficult to know how many sterile flies would achieve this result. APHIS and CDFA released the sterile flies both by air and by tossing them out of “fried chicken buckets” from the backs of moving vehicles. The latter method was later found not to be particularly effective.

After initial sterile fly efforts failed, in July 1981, the eradication program began using helicopters to releasing treated bait over urban areas, which wasn’t well received by the public. Eradication personnel continued to strip fruit from trees, apply bait and soil drenches to kill larvae and emerging pupae, and release sterile flies in select areas. They also stopped 5.2 million cars and trucks at roadblocks to check for host material, handled over 250,000 phone calls, placed and monitored over 100,000 traps, and mobilized thousands of local residents in public education and “worm watch” activities. Medfly and the eradication efforts disrupted the daily routines of millions of people in California and upended trade in many agricultural commodities.

During this time, Johnny Carson made the Medfly famous on The Tonight Show—the pest was a staple in his monologue. In one instance he even dressed up as a Medfly and was “interviewed” by Ed McMahon. That episode and others reached millions of viewers across the country.

More Medfly infestations followed in southern California, but they were managed more effectively thanks to the lessons learned from the outbreak in the northern part of the State. At its peak, the 1980-1982 Medfly quarantine covered over 3,000 square miles in parts of 6 counties and employed 4,000 people. Eradication was declared in September 1982, protecting California’s plentiful and varied crops from this invasive pest.

Today’s Focus
APHIS and its partners have made great strides in improving fruit fly traps to detect these invaders earlier and in using more environmentally friendly methods. The fruit fly preventive sterile release programs in California and Florida, which continue today, are a legacy of the hard-fought Medfly battles of the 1980s. The focus now is to eliminate any new introductions before they even reach the detection traps.

Want to learn more? Check out the “From Beagles to Biotech: APHIS in the 1980s” StoryMap.