Bovine Tuberculosis (TB) is a chronic bacterial disease (primarily of cattle) caused by the microorganism Mycobacterium bovis. The disease can affect other species, including humans and wildlife. Bovine TB is most often transmitted to humans by ingestion of unpasteurized milk, inhalation of aerosolized respiratory tract bacteria, and inoculation by contaminated instruments (such as knives). The disease can be spread from livestock to wildlife or wildlife to livestock via the fecal-oral route, ingestion of contaminated food, or through respiratory transmission. The APHIS Bovine TB Eradication Program has reduced TB in U.S. cattle; however, spillover into wildlife may maintain the microorganism in the environment and function as a source of re-infection for livestock.

The Guidelines for Surveillance of Bovine Tuberculosis in Wildlife were developed by APHIS in collaboration with wildlife professionals with expertise in bovine TB. These recommendations incorporate the most recent scientific literature and are intended to serve as a starting point for developing and conducting surveillance for bovine TB in geographic areas where the presence of disease in wildlife is unknown. Interagency cooperation is strongly encouraged between state wildlife agencies, other state cooperators, stakeholders, and APHIS Wildlife Services and AHPIS Veterinary Services to develop an effective area-specific surveillance plan

Bovine tuberculosis in wildlife was first documented in the United States in white-tailed deer in 1933. They can be infected and can transmit bovine TB via the oral or respiratory route and are considered reservoirs in some areas. Other wildlife and feral species in North America in which bovine TB has been detected include: 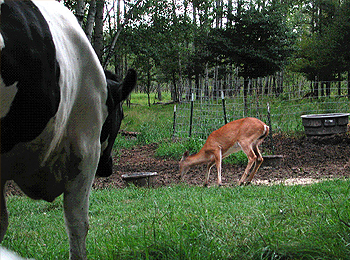 The NWDP assists with bovine TB surveillance in wildlife and with determining potential management actions to help control disease in wild populations. These projects often occur in regions of the United States following the detection of bovine TB in domestic livestock or captive cervids. Short-term surveillance programs are usually established to evaluate whether bovine TB is present in wildlife on or near infected premises.