The Feral Swine Eradication and Control Pilot Program (FSCP) is a new program authorized by the 2018 Farm Bill.  In addition to the program established in 2014. The purpose of the FSCP is to respond to the threat feral swine pose to agriculture, native ecosystems, and human and animal health. The Farm Bill provides that FSCP be implemented jointly by USDA’s Animal and Plant Health and Inspection Service (APHIS) and Natural Resources Conservation Service (NRCS).  Total funding for the program is $75 million for the life of the current Farm Bill and is divided evenly between the APHIS and NRCS.

The activities of FSCP are being conducted in pilot areas where feral swine have been identified as a threat, as determined by the Secretary. 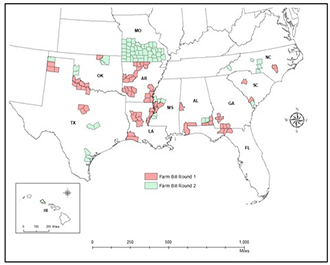