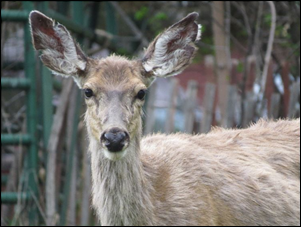 For many years, NWRC researches have worked to develop methods to reduce the transmission and spread of CWD among wild and captive deer and elk.

Chronic wasting disease (CWD) is a fatal neurological disease that affects a number of wildlife species, including mule deer, white-tailed deer, elk, and moose. CWD is caused by abnormal proteins called prions. Prions change normal proteins in the host animal’s cells resulting in concentrations of abnormal proteins. Over time, these abnormal proteins accumulate in the central nervous and lymphatic systems causing a degenerative lack of control and a “wasting-away” death.

There is no known cure or vaccine for CWD. The origin of CWD is unknown. CWD was first observed in a captive deer in 1967 in Colorado where it was initially believed to be malnutrition. In 1977, CWD was determined to be a transmissible spongiform encephalopathy and the first infected wild animal, an elk from Rocky Mountain National Park, was diagnosed in 1981.

Since that time, CWD has been found in 25 states and impacted numerous wild and captive herds of deer and elk. Concerns over the impacts of diseases, such as CWD, on the United States livestock industry and wild deer and elk populations continues to stimulate research to prevent disease outbreaks and minimize the transmission of diseases between wildlife and livestock.

From 2002 to present, National Wildlife Research Center (NWRC) scientists have been active in CWD research conducting more than 100 basic and applied studies on deer and elk directed at mitigating disease transmission at the wildlife-livestock interface. Results from this research have helped inform many management and regulatory actions at state and federal levels. The following provides a summary of NWRC’s CWD research accomplishments and recommendations for future research efforts.

In 2019, Congress expressed a renewed interest in CWD with new legislation being developed in the House of Representatives and Senate to fund CWD management and research. Possible research topics include evaluating the use of dogs to detect CWD; exploring targeted sex and age-class removal of deer to reduce the spread and prevalence of CWD; and characterizing and mapping CWD prion strains across the United States.