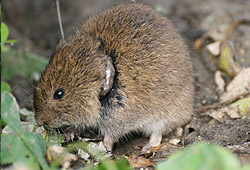 Numerous mammal species can damage trees in Pacific Northwest ecosystems. Voles, like many small rodent species, can produce many litters in a single year (every 21 days) and females are mature 30-40 days after they are born. Average litter size is 3 pups.

With this type of reproductive capability, it is easy to see why vole populations can rapidly expand in ideal habitats. Voles can be especially damaging on small tree farms where the understory is mostly comprised of grasses. Small holes and runways through grass often signify voles. Voles feed on young tree roots, usually stripping them and leaving pointed tips. In addition, they will also feed on stems and cause some girdling of seedlings. Circular marks on girdled seedlings are characteristic. Barriers around trees, and rodenticides, have both been used to reduce vole damage. However, with rodenticides, it is important to first reduce the vegetation so that the rodenticide can reach the runways. The best means of vole control is through habitat modification. Reduction of grasses and vegetation through mowing, plowing, or herbicides, reduces the attractiveness of an area for voles.

Hares, rabbits, and pikas also damage trees. Pikas are restricted to the eastern drier areas of the western United States, generally occurring in rock outcrops. Small piles of grass and other forbs in rockslides are good evidence of pika presence. In the Pacific Northwest, the snowshoe hare is the most widely distributed rabbit species. Hares leave large angular toothmarks and sometimes wood chips at the base of damaged trees. Seedlings less than ¼ inch are preferred; however, in winter, hares will feed on the bark of trees. Several methods of control have been tried including hunting and employing Vexar tubing to protect seedlings, both of which can be costly. Removing cover with herbicides is another potential method to reduce damage; however, this may affect habitat use by other wildlife. Success in reducing damage has been shown when larger seedling stock has been used. Additionally, repellents show promise, and the NWRC field station continues to investigate this tool.

Porcupines are the second largest North American rodent (stream beavers are the largest) and they have modified dorsal hairs better known as quills. With their muscular tails and long claws, porcupines are well-adapted for climbing trees. Porcupines feed on herbaceous foliage on the ground in the spring and summer, and in fall and winter can be found foraging on trees. Clipped needles, bark chips, and quills at the base of trees are prime indicators of porcupine activity. Porcupines strip the bark from trees and leave horizontal teeth marks, in addition to clipping stems. Young pole-trees are preferred in the winter, and crowns of trees are the most susceptible. Porcupine damage becomes evident in the summer when the crowns appear dead. Although fencing does work to protect areas, it is time-consuming and expensive. Trapping and hunting are the most reliable methods for reducing damage by porcupines.