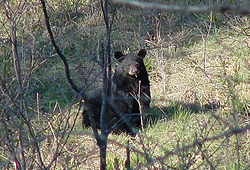 As they emerge from their winter dens, bears need an energy source and food is relatively scarce. Concurrently, trees are breaking dormancy and starting to generate carbohydrates. It's at this time of year that bears commonly girdle Douglas-fir trees to feed on the available carbohydrates. Bears strip bark from a tree with their claws, then feed on the sapwood by scraping it from the heartwood with their teeth. Most frequently, bears girdle the bottom 3-to-5 feet of a tree. Occasionally, a bear will strip an entire tree.

Bear damage impacts the health and economic value of a timber stand, and a single bear can peel bark from as many as 70 trees per day. Complete girdling is lethal, while partial girdling reduces growth rates and provides avenues for insect and disease infestations. Economic loss is compounded because bears select the most vigorous trees within the most productive stands, and frequently damage occurs after implementing stand improvements, such as thinning or applying fertilizer. The fiscal loss is further exacerbated because of the extended time, 20 plus years, necessary for a timber stand to return to its pre-damaged state.

Historically, management to protect timber resources from bear damage consisted of lethal removal. Although lethal removal continues, it is generally incorporated within a broader management plan. Animals are not generally captured and relocated because it is difficult to locate suitable sites. Nonlethal approaches such as repellents, fences, and frightening devices are impractical to protect timber stands and efficacy has not been demonstrated. An alternative feeding program has demonstrated efficacy to reduce tree girdling by bears. In addition, common silvicultural practices also can influence whether bears select to forage in a timber stand.

Scientists at the field station have conducted a series of studies to determine forage selection criteria of black bears girdling trees during the spring, and to relate these criteria to silvicultural practices. Bears prefer trees high in carbohydrates and low in terpenes. Scientists examined how applying fertilizer, thinning stands, and pruning trees can alter concentrations of these chemical constituents. Study data supported observations that increased bear damage is more likely to occur in fertilized stands shortly after treatment and in stands post thinning--in both cases because of increased carbohydrate levels. Pruning decreased the carbohydrate to terpene ratio rendering pruned trees to be less preferred to bears than unpruned trees.

Field station scientists also conducted studies to evaluate efficacy and long-term consequences of the program providing alternative foods to bears to reduce tree girdling. The efficacy study revealed the percentage of damaged trees in stands with foraging bears varied from 2% to 52%. When supplemental feeding was introduced on these stands, damage was reduced to approximately 10% of that sustained on untreated stands. Concurrent experiments provided insightful data on bear use of feeding stations. Numerous bears fed at the stations, including females with and without cubs, yearlings, and boars.There was little antagonistic behavior observed around the feeders, and no evidence that this behavior inhibited foraging opportunities for long. Supplemental feeding also did not affect the home range sizes of bears in feeding areas, but it may serve to concentrate bears in a particular location.

Though data suggest silvicultural practices can affect tree palatability, foraging is relative and although implementing or delaying a practice may alter available carbohydrates, bear damage can still occur. Data also suggest that providing an alternative food can reduce damage, and consequences of the program we evaluated were minor. Monitoring, however, is important because efficacy may be density dependent and damage has occurred in stands with feeders. Feeding also should be considered a long-term commitment. Pulling active feeders from stands while trees remain vulnerable to bears may lead to significant damage.