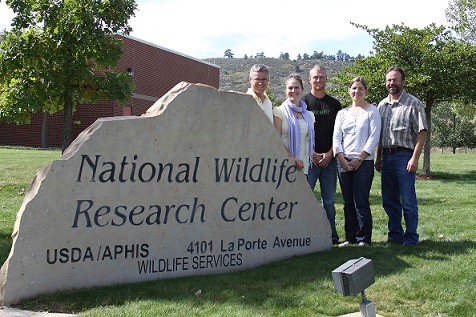 Development of Repellent Applications for the Protection of Plant and Animal Agriculture
The NWRC Repellents Research Project is focused to develop information and methods relevant to the wildlife damage management and the human-wildlife conflicts associated with U.S. plant and animal agriculture.  By its very nature, wildlife is a highly dynamic and mobile resource that can cause damage to agricultural and industrial resources, pose risks to human health and safety, and affect other natural resources. As part of human-wildlife interactions in the United States of America, the negative impacts of wildlife to plant and animal agriculture include direct losses to crop production through wildlife consumption of newly-planted, maturing and ripening crops; direct losses associated with wildlife consumption of dairy and feedlot rations; indirect losses from fecal contamination, shattering or lodging of plants prior to harvest; and indirect losses associated with the transfer of pathogens in water troughs, feeders and concentrated animal feeding operations.

Research needed for the mitigation of wildlife depredation of agricultural crops includes the development of damage management strategies and novel applications of current technology to existing human-wildlife conflicts.  Our current approach includes the development of repellent application strategies, the evaluation and development of existing and novel avicides, and the evaluation of candidate repellents and novel repellent formulations.  The NWRC Repellents Project will evaluate the efficacy of anthraquinone-based repellents and novel repellent formulations for the protection of ripening rice and emergent soybean seedlings.  Research needed for the mitigation of avian pests to animal agriculture includes the development of intervention strategies for dairies and feedlots associated with direct and indirect losses to their milk and beef production.  Our current approach includes production modeling and economic modeling of the nutritional depletion of cattle feed by European starlings and red-winged blackbirds.  The NWRC Repellents Research Project is focused to develop information and methods relevant to the wildlife damage management and the human-wildlife conflicts associated with U.S. plant and animal agriculture.