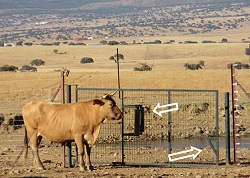 Whether it’s a reliable watering hole, lush pasture or pile of winter hay, wildlife and livestock often use the same re-sources. Unfortunately, this overlap and the interactions resulting from it can contribute to the spread of diseases, such as tuberculosis (TB).

“Many infectious diseases are spread among animals by contaminated food, water, and soil or by direct contact between individual animals,” states NWRC research wildlife biologist Dr. Kurt VerCauteren. “The best way to control the spread of disease between live-stock and wildlife is through effective biosecurity, husbandry, and pasture management.”

In Spain and many other areas of the world, TB is prevalent in wild-life and the disease is easily transmitted between wildlife and live-stock. As part of an international collaboration with the Instituto de Investigacion en Recursos Cinegeticos, NWRC researchers evaluated the effectiveness of exclusion devices, such as cattle-operated bump gates and fencing, for reducing TB transmission between domestic cattle and wild ungulates at watering holes in Spain.  Researchers first monitored six watering holes with cameras at a TB-positive cattle farm to quantify wildlife-cattle interactions. Then, three watering holes were designated “cattle-only” sites and three “wildlife-only” sites. Cattle-only sites were surrounded with a wild-life proof, 8-foot fence and a cattle-specific gate. Many cows learned to operate the cattle-specific gates quickly, with other cows learning from them. Within 2 weeks, approximately 70 percent of the cows routinely entered and exited through the cattle-specific gates. Wildlife-only sites were surrounded by a 4-foot fence that wild ungulates could jump or enter into through small openings, but cattle could not. Throughout the study, cows were unable to access the wildlife-only sites.

The study demonstrates how simple, low-cost fencing strategies can serve as effective biosecurity measures for reducing contact and disease transmission between cattle and wildlife