The National Wildlife Disease Program has been collecting samples from wild birds for surveillance since 2006.  Initially, the primary focus was highly pathogenic avian influenza, a disease that can affect humans and domestic poultry.  Since then, the focus has moved to monitoring a number of avian pathogens that could have a potential impact on domestic poultry, human health and other wild bird species. The diseases currently being monitored as part of this avian health project include avian influenza, avian paramyxovirus serotype-1, and several arboviruses.  A pilot project to monitor Salmonella spp. in wild birds surrounding poultry farms has also been initiated. 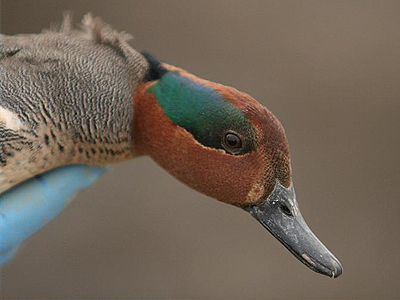 Low pathogenicity avian influenza viruses (LPAIV) cycle naturally through waterfowl (Anseriformes) and shorebird (Charadriiformes) populations, and these populations of wild birds are considered to be natural reservoirs for the low pathogenicity form of avian influenza.LPAIV is distinguished from high pathogenicity avian influenza (HPAIV) based on its ability to cause disease in poultry.  An introduction of a HPAIV into the U.S. could potentially decimate the $38 billion poultry industry by affecting international trade and consumer confidence, and also through the costs associated with eradication. The purpose of surveillance in wild birds for avian influenza virus (AIV) in the U.S. is for early detection of the virus and to gain additional knowledge regarding LPAIV to help better protect the U.S. poultry industry and economy.

Newcastle disease (ND) is a contagious viral disease affecting birds caused by virulent avian paramyxovirus serotype 1 (APMV-1). More than 230 species of birds have been found to be susceptible to natural or experimental infections with avian paramyxoviruses (APMV), but in most cases the infections were asymptomatic and were caused by low virulence viruses. In wild birds the effects appear to vary depending on the species of bird and the virulence of the particular APMV strain.

Virulence of APMV-1 is measured by its ability to cause disease in chickens, and is subsequently categorized as a high pathogenic or low pathogenic virus. Newcastle disease virus (NDV) refers to only those virus strains of high pathogenicity. Virulent NDV is especially important to the poultry industry because it causes illness, death, and reduced egg production resulting in severe economic losses. These strains can cause acute, lethal infections and hemorrhagic lesions in the digestive tract of chickens that can result in 100% mortality. While rare in the United States, NDV has been introduced on occasion, through illegal trafficking of exotic bird species. Among wild birds, ND is usually suspected when mortality rates are high and species such as cormorants, gulls, or pelicans are detected in the upper Midwest or northeast regions where ND outbreaks frequently occur.

Eastern equine encephalitis (EEEV), St. Louis encephalitis (SLEV), and LaCrosse virus (LACV) viruses are all mosquito-borne diseases that although rare in the U.S., can cause severe symptoms in humans, such as neuroinvasive disease or even death in some cases. Turlock virus (TURV) is another important arbovirus that although it is found regularly in North and South America, it receives less recognition because it infects domestic birds as opposed to humans or domestic animals.

Salmonella spp. are bacteria that are ubiquitous in nature and can cause infection in birds and mammals including humans.  Certain serotypes are adapted to cause disease in specific hosts while others can cause disease in multiple hosts. Salmonella spp. infection has been a continuous problem for the poultry industry and can lead to significant morbidity and mortality in domestic flocks.  Eggs or meat contaminated with Salmonella spp. routinely cause outbreaks of human disease and represent a public health risk. Infection is also commonly found in wild birds, especially at sites where large numbers of birds congregate.

By monitoring for these pathogens the NWDP is able to learn more about the ecology of these diseases and the risk they pose to humans and domestic poultry.