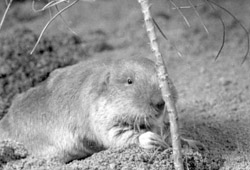 Pocket gophers are burrowing rodents named for their external fur-lined cheek pouches. They prefer roots and stems of herbaceous plants, especially those found in the early stages of forest growth and succession. Because of this preference, seedlings become a very tempting target. Commonly gophers will prune seedling roots and often pull the entire seedling into their burrow. Stem clipping at ground level and girdling are also common with seedlings less than half an inch in diameter—the most vulnerable. Damage by pocket gophers to root systems may go unnoticed until seedlings become discolored or tip over. Several factors have been noted that predispose a stand to pocket gopher damage:

Management practices to reduce pocket gopher damage include silvicultural practices, such as minimizing disturbance of an area, habitat manipulation, trapping, repellents, fumigation, and seedling barriers such as Vexar tubing. However, strychnine baiting is the most widely used method to reduce pocket gopher populations prior to planting seedlings.

Baits are applied below ground to minimize impacts on nontarget species. Scientists at the field station have conducted several tests to determine risks to nontarget animals, such as golden-mantled ground squirrels,yellow pine chipmunks, and weasels, that may occur while strychnine-baiting pocket gophers. Population responses of nontarget species, were monitored on two reforested sites in Oregon. Immediately after baiting, ground squirrel numbers declined, however, the following spring the population had recovered. Yellow pine chipmunk populations were not reduced by strychnine baiting, but in fact increased in the treated plots the following spring. This increase may reflect an invasion of chipmunks in the absence of ground squirrels.

Predator-prey interactions are largely unknown since subterranean predator activity is difficult to observe. Thus, artificial burrow systems were established to investigate interactions of weasels and pocket gophers at the field station. Weasels readily killed and consumed healthy pocket gophers. All weasels ate strychnine-baited gopher carcasses after 72 hours, but no weasels died from secondary poisoning. Although caching behavior of weasels may increase their exposure to secondary poisoning of strychnine, this in turn may be minimized by the fact that the majority of weasels only sampled carcasses

In addition, scientists sampled several insect species to determine strychnine concentration levels and any potential risks to insectivore species. Fly larvae and ants were found to contain high levels of strychnine, however, little risk is posed to insectivores due to the quantity of insects that would have to be consumed to acquire a lethal dose. Studies by the field station have shown that the current method of controlling pocket gopher populations, strychnine baiting, poses relatively little risk to nontarget species.