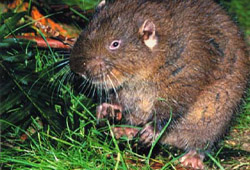 The mountain beaver, endemic to California and the Pacific Northwest, is considered the most primitive living rodent species. In open forest areas, large holes, often with clipped sword fern or forbs neatly arrayed around them, are indicative that mountain beavers may be present.

Mountain beavers are voracious. When the animals forage on seedlings, the seedlings may show retarded growth or deformities, or may die. Though ferns and salal are preferred foods, bark and twigs of trees are readily taken when other forage is limited. Douglas-fir does not appear to be a highly preferred food, yet establishment of Douglas-fir seedlings is often difficult in areas with mountain beaver. In most areas, damage by mountain beaver is limited to seedlings less than 1.5 inches in diameter. However, larger trees can suffer basal barking and undermining of roots.

For a species that has been around for so long, very little is actually known about the its basic ecology. Thus, the NWRC field station is conducting studies to expand current understanding of this rodent. At the station, researchers have the ability to house mountain beavers in large outdoor habitat pens in which vegetation and populations can be manipulated.

Field station scientists are currently conducting several studies to understand mountain beaver movements and dispersal patterns under varying vegetational characteristics (how far they can disperse to reinvade areas, is important for forest managers). Home range size for adult mountain beaver was previously reported as 0.08 to 0.5 acres with an average home range size of 0.03 acres (0.07 ha). Several factors can affect home range size including population density, available forage, available cover, and available water. To understand which of these factors may affect movements, scientists captured and radio collared 41 mountain beavers. Although most previous literature supported a nocturnal activity pattern for the mountain beaver, our data show that mountain beavers are active throughout a 24-hour period. Home range sizes differed between study sites and were substantially larger than previously reported.—from an average of 1.17 ha (± 0.24) to 4.16 ha (± 3.23). Preliminary results suggest that the difference in home range sizes between the two areas is a result of available forage. In the absence of available preferred food, mountain beavers may travel considerable distances, as shown in this study, to forage on available plants (e.g., seedlings).

Predation on the study sites was high (40%). Bobcats, coyotes, and raptors are the main aboveground predators, and an unknown species, likely a mink or spotted skunk, the belowground predator. In addition to the observed home ranges that were larger than previously reported, we have found that mountain beaver can disperse over 0.5 km to establish new territories.

Seedling protection from mountain beaver damage has been limited to barriers, although these have met with limited success. Trapping is the most productive means to reduce mountain beaver populations, and hence, damage to new seedlings. With current information gained from mountain beaver movements and preference for food resources, alternative nonlethal methods to reduce damage may be implemented. For instance, managing for an alternate winter food source may help reduce the amount of damage by mountain beaver to newly planted seedlings.