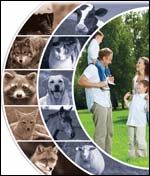 Today, state and federal wildlife ORV programs are faced with declining resources. Ironically, as  these resources shrink, societal and environmental changes are leading to increased opportunities for people and pets to be exposed to wildlife, particularly in urban environments. Progress has been made towards eliminating rabies in terrestrial wildlife, but continued coordinated efforts are still needed. The crucial component to rabies elimination within the United States lies in vaccinating the potential wildlife reservoirs of the disease.