Native American ranchers in Montana constantly battle invasive weeds that crowd out the grazing grasses their cattle need.  But through partnerships with APHIS’ Plant Protection and Quarantine (PPQ) program, the Tribes have found that tiny foreign insects—a biocontrol arsenal—can help them win that struggle.

Weeds such as leafy spurge and spotted knapweed have grown in Montana and on adjacent reservations for generations.  Although herbicides, grazing, and mechanical controls such as plowing can help manage them, biological control agents such as European and Eurasian insects are increasingly popular among some Tribes.  Carefully screened by PPQ and its research partners, these “biocontrol agents” use the area’s invasive weeds as a nursery where they lay eggs.  After the larvae hatch, they nibble on the target weeds, stunting their growth and development.

Although the concept seems simple, getting the system to work requires ongoing coordination between the office of PPQ’s State Plant Health Director for Montana, Gary Adams, a multitude of weed specialists, and participating Tribes, including the Confederated Salish and Kootenai Tribes, the Blackfeet Nation, the Fort Belkap Indian Community, the Chippewa-Cree Tribe, the Crow Nation, the Northern Cheyenne Nation, and the Sioux/Assiniboine Tribes of the Fort Peck Reservation.

PPQ works with natural resource specialists from each Tribe and the Bureau of Indian Affairs to gather insects established in Montana or other States.  Cooperatively, they release and monitor the insects in areas with significant weed infestations, in hopes that these insects will establish populations of their own, to serve as reservoir of sorts for the Tribes to use in the future.  PPQ helps monitors these catch-and-release sites, called insectaries; it also provides funding to the Indian Nations Conservation Alliance (INCA) to support these efforts as well as workshops that teach participants how to identify target weeds, handle equipment and insects, and pursue alternative control methods.

For their part, the Tribes place and maintain the insectaries, ensuring they remain free from pesticides and safe from animals—all with the goal of becoming self-sustaining biocontrol practitioners.

Surveys attest that over time, the insects are doing their job.  A case in point is the Fort Belknap Indian Community, which has collaborated for many years with PPQ to identify sites for insectaries and releasing insects that attack leafy spurge.  By 2006, the weed’s presence had dramatically diminished on the reservation.  Even though leafy spurge resurfaced after a 2011 flood damaged the community’s insectaries, PPQ, INCA, and the Tribes have continued their efforts and hope to have the weed under control again within a few years.

In the meantime, Adams and his team are strengthening current Tribal partnerships and reaching out to form new ones.  “New personnel working for some Tribes are just becoming aware that there’s a biocontrol option out there,” says Adams.  “Although it may be a slow process, it can be a long-term, cost-effective solution” to keeping Native herds and economies thriving.  In the end, he says, the best indicator of PPQ’s success is how his staff works with the Tribes toward a goal everyone agrees on: protecting Indian Country’s agriculture and “keeping the stewards of the land on the land.” 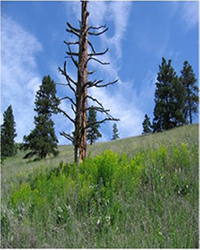 Leafy spurge infestations, 1998 (left) and in 2006 (right), after use of biocontrols; photos by Richard W. Hansen, APHIS