Unmanned aircraft systems (UASs) have become portable, light, and affordable. Scientists with the U.S. Department of Agriculture’s Plant Protection and Quarantine (PPQ) program have taken note. “PPQ has a long history of adapting leading-edge technology to plant protection, and we recognize the potential of UASs as a safe and powerful tool,” said Ron Sequeira, Associate Deputy Administrator of PPQ’s Science and Technology program. “This technology could help us safeguard America’s agricultural and natural resources in many ways.”

Since 2014, PPQ has been working under cooperative agreements with M3 Consulting Group, Texas A&M AgriLife Extension, USDA’s Agricultural Research Service, and others to co-develop UAS technology applied to plant health protection. The cooperators have customized UASs for regulatory applications. They also provide licensed pilots and observers to PPQ scientists, who are developing methods for using UASs operationally in the field by PPQ and its plant health safeguarding partners at U.S. Customs and Border Protection.

Here’s a roundup of their work to date. 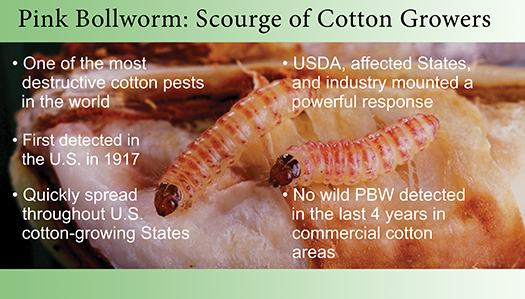 For decades, PPQ has used sterile insect technique combined with manned aircraft to suppress invasive pest reproduction. This technique is a three-step process: 1) Mass rear insects of a targeted species, 2) Sterilize them via irradiation, and 3) Release them—typically from an airplane—over an area already infested with that species or at high risk of becoming infested. When the sterile males mate with wild insects, they produce no offspring and stop the pest life cycle. That’s a win for American agriculture.

PPQ scientists were eager to test UASs’ suitability for sterile insect release, starting with the pink bollworm (PBW) moth. PPQ and its State and industry partners have nearly eradicated this destructive cotton pest from the United States. In the event that “pinkie” ever tried to make a comeback, the UAS might be the best tool to stop it cold by quickly saturating infested areas with sterile PBW moths.

PPQ took the idea on a test flight in 2015. A fixed-wing, battery-powered aircraft with a 6-foot wingspan flew more than 100 operational flights releasing sterile PBW moths.

“The UAS proved just as capable of releasing healthy, active, sterile PBW moths as a conventional aircraft, but it was cheaper to operate, smaller, easier to transport, and required less infrastructure,” said Senior Entomologist Michelle Walters, who led PPQ’s UAS Working Group from its inception in 2016 to her passing in July 2017. “Better still, the UAS uses lithium polymer batteries, which eliminates the need for costly fuels. And having no pilot on board reduces safety concerns.”

Despite its promise, the fixed-wing UAS was not ideal for field use because it required ample takeoff and landing space. In 2016, PPQ turned to another UAS platform: a battery-powered, eight-rotor, helicopter-like UAS capable of vertical takeoff and landing (VTOL).

“The VTOL UAS outperformed the fixed-wing UAS in every benchmark.” Walters said. “It tripled the fixed-wing’s moth storage capacity and number of acres covered, and its set-up time dropped to less than a tenth of the fixed-wing’s time. Unlike the fixed-wing, it could hover and release all insects from a single location. An added benefit is its ability to complete its entire mission, from takeoff to landing, under computer control.” 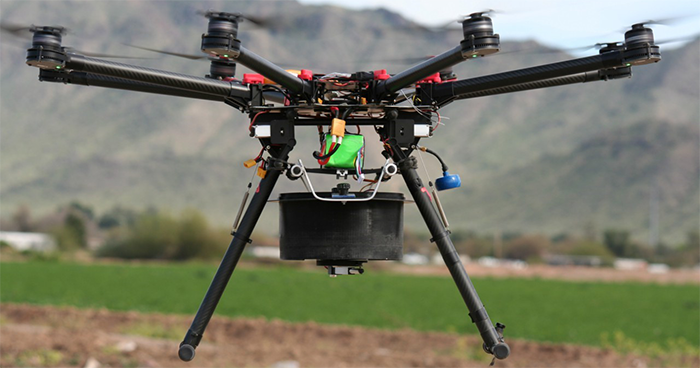 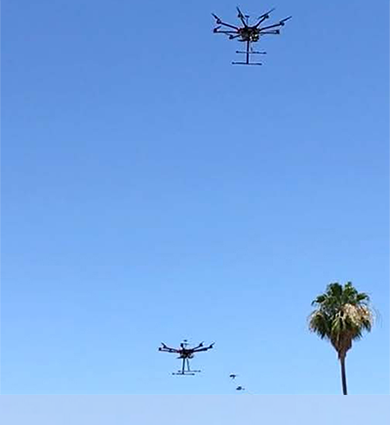 Despite the many advantages of UASs, they have limited payloads. That means manned aircraft are still required to cover large release areas. That may change, however, thanks to a new UAS technique called “swarm,” although “formation” might be a more accurate—though less exciting—term.

A swarm is simply a group of UASs flying in coordination to simultaneously release sterile insects in precise, usually parallel rows over crop fields. Swarms could increase sterile insect payload capacity and coverage area while reducing risk and cost. Eventually this approach could match or surpass the release capacities of manned aircraft.

Laying the Groundwork for the Swarm in Texas

Through a Farm Bill-funded cooperative agreement, PPQ and M3 will test swarms that release sterile Mexican fruit flies over infested citrus groves in southern Texas. PPQ currently uses manned aircraft to release billions of sterile flies annually over these areas to suppress any current infestations and protect against new ones. Swarm technology may offer a cheaper, safer alternative. In fact, swarms could continue air operations in cloudy weather that would have grounded manned aircraft.

On July 18, PPQ and M3 staff released sterile Mexican fruit flies from a UAS—a program first. They used the release device designed for PBW moths to release the flies over grapefruit groves. The team is still studying the results, but they seem promising so far in terms of sterile fly survival and wide area of disbursal. The team plans to keep advancing the swarm technique and modify the release device to better adapt it for sterile Mexican fruit flies.

Sterile insect release is just one of five applications PPQ is exploring for UAS technology. They may not all make the leap from field trial to field operation, but only one success would deliver a tremendous return on investment. The other four applications include: 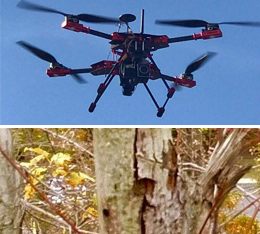 Tree Surveys:  The Asian longhorned beetle (ALB) is an invasive, tree-killing insect infesting small areas of Ohio, Massachusetts, and New York. PPQ pest surveyors in those States want to find every ALB-infested tree. They use binoculars to peer high into trees looking for signs of infestations. Currently, if they suspect an infestation, they need to bring in a tree climber who scales the tree to confirm the ALB’s presence. UAS technology could expand the reach of the surveyors.

In addition to current practices, a ground surveyor could launch a VTOL UAS and use a mounted high-resolution camera to confirm suspected infestations in areas that tree climbers cannot reach. That could save the ALB eradication program considerable time and money. UASs could also check trees in wetlands that would be otherwise impassable by foot in the warmer months due to mud, deep water, and thick vegetation. This would allow PPQ to identify infested trees early and remove them before more beetles have a chance to emerge, helping to ensure the eradication program’s success.

Vessel Surveys:  The Asian gypsy moth (AGM) is a destructive forest pest that devours tree leaves. This invasive species is native to the Far East in Russia, China, Japan, and the Korean Peninsula. Female AGMs can lay egg masses on U.S.-bound vessels and cargo containers, giving the moth a pathway into our country and putting our forests at risk. PPQ inspects and certifies these vessels to determine they are AGM-free before they depart for our shores. The question is: Can UAS technology be an effective tool for detecting egg masses on vessels in Far East ports?

To find out, PPQ scientists conducted trials in 2016 by attaching non-viable AGM egg masses to the side of a building that simulated a vessel’s hull. Then they conducted a test inspection with a UAS. One person controlled the UAS while another operated the camera. During the test, they encountered wind drift problems while flying next to the building. They also noted that the operator must be close to the UAS to maintain optimal control. During the next phase of investigation at Port Houston, the team significantly stabilized the vehicle under typical wind conditions. They were also able to maintain optimal camera angles to spot potential egg mass sites by using the UAS’ video stream and 10x optical zoom to collect snapshots. 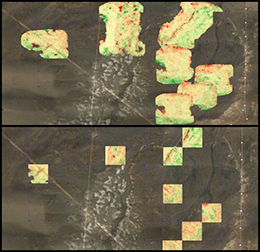 Rangeland Health Monitoring: Every year, PPQ keeps a close eye on Western rangeland to protect it against economically damaging outbreaks of grasshoppers and Mormon crickets (GHMC). Rangeland is an important source of livestock forage for ranchers. That’s why PPQ surveys GHMC populations and, when warranted, applies treatments to control damaging population levels. In 2016, PPQ scientists began assessing whether UASs could help by providing a bird’s-eye view of rangeland.

In 2016, they used a UAS equipped with a special camera (multispectral) that captures the wavelength of light reflected off of rangeland grass. Their goal is identify the grass’s wavelength signature so they can differentiate it from other rangeland plants. That way they can tell whether treatment applications have effectively suppressed GHMC populations and protected rangeland forage. If the grass coverage hasn’t changed, the treatment worked. If GHMCs diminished the grass, the treatment was ineffective. The team plans additional studies to identify the boundaries of GHMC populations, allowing a UAS to apply precise and timely treatment applications. This could reduce the labor hours needed for surveys and lessen the amount of chemical or bait treatment applied.

Grain Sampling at Ports: At seaports and rail yards, PPQ and USDA’s Grain Inspection Packers and Stockyards Administration (GIPSA) work together to certify that U.S. grain exports meet the requirements of the importing country. GIPSA typically collects and inspects grain samples to confirm the absence of pests and diseases of concern, and PPQ uses GIPSA’s data to certify the shipment. Delays in grain sampling, however, can be costly, resulting in product loss and idle ships and containers. To find a solution to minimize delays, PPQ evaluated the capability of a VTOL UAS to remotely gather a grain sample.

They equipped the UAS with a sampling device—a scissors-action sand/silt dredge suspended from nylon line—and a downward-facing camera. For the grain collection target, they used a grain-filled plastic bin roughly the size of the small opening at the top of a grain silo. The UAS successfully launched, descended until the dredge entered the grain, collected a sample meeting GIPSA’s size requirements, and returned with the sample intact. As next steps, PPQ and GIPSA will identify a port or train yard with grain sampling operations and conduct more tests in real-world conditions. PPQ will also investigate a deep-penetration probe to collect representative samples when certain pests may be present within the shipment.

Ensuring Safety and Citizen Privacy in the Age of UASs

“As we continue to explore the powerful potential of UASs, we will always make two things our top priorities—operational safety and citizen privacy,” Walters said. “We are meticulous in following all Federal Aviation Administration’s (FAA) regulations and State and local laws for using UASs."