For years ash trees had been declining and dying in southeast Michigan for no apparent reason. Then in 2002, the Michigan Department of Agriculture discovered why—it was a small wood-boring beetle called emerald ash borer (EAB). Soon after it was detected, USDA’s Plant Protection and Quarantine (PPQ) program sent PPQ and Forest Service scientists to China to look for EAB’s natural enemies in its native range. They found three wasp species (parasitoids) attacking EAB eggs and larvae, and brought them back to study—hopeful that at least one species could be safely released as a biological control (biocontrol) against the pest.

Biocontrol is a practical pest management tool that uses pests’ natural enemies to suppress or reduce pest populations. It is cost-effective and environmentally sound, reduces the use of conventional pesticides, and is self-sustaining once biocontrol agents establish their populations.

Fast forward to 2021. PPQ’s EAB biological control staff rear four stingless wasp species that are EAB natural enemies. Three attack EAB’s larvae, and one attacks its eggs. The staff produce the wasps year-round and keep them in cold storage until spring. In mid-May, the staff will begin to ship wasps to our program cooperators—State departments of agriculture, Native American tribes, universities, and environmental groups—for release.

“This release season we will send multiple shipments of one or more species to 150 release sites in EAB-infested states,” said Supervisory Entomologist Ben Slager, who manages PPQ’s EAB biocontrol rearing facility. “All four wasp species are amazing EAB hunters; however, researchers know the most about how effectively Tetrastichus attacks and kills EAB larvae, spreads, and protects ash sapling and young trees." 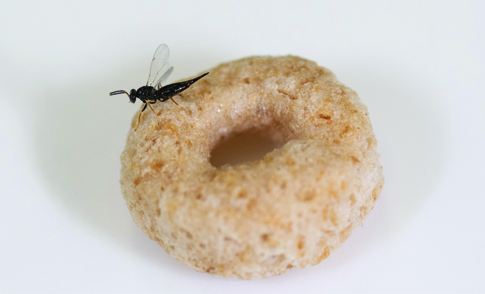 Tetrastichus are comparable in size to an average mosquito. They hunt by feeling vibrations from EAB larvae feeding under the bark. They use their ovipositor to pierce through the bark and lay multiple eggs inside the larvae. Their eggs hatch, feed, and eventually kill the EAB larvae as the wasps complete their lifecycle and bore out of the tree ready to attack EAB larvae.

Since the start of the biocontrol program, PPQ has released about 8 million wasps in 30 EAB-infested States. We have successfully recovered wasp offspring in 22 States, demonstrating that the wasps are reproducing, becoming established in the areas where they were released, and—more importantly—attacking and killing EAB.

EAB parasitoids are showing promise in several States, especially in terms of protecting young ash saplings from EAB. In 2019, USDA scientists teamed up with researchers from the University of Massachusetts, Amherst, to study the effects of EAB biocontrol in Michigan and several northeastern states. They found that the wasps were killing 20 percent to 80 percent of EAB in ash trees up to 8 inches in diameter. Their study documented that more EAB were being attacked by wasps, fewer EABs were attacking ash trees, and the ash trees were regenerating.

“In January 2021, PPQ removed the Federal domestic EAB quarantine regulations so we could devote our resources to biocontrol,” Slager said. “I’m happy to say the biocontrol results from the field have been encouraging, but we certainly have a lot more work ahead of us.” 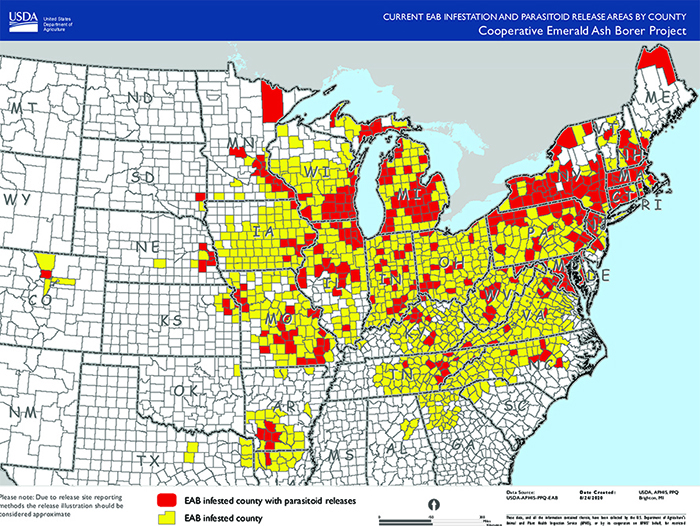