(Cover photo courtesy of the Washington State Department of Agriculture.) 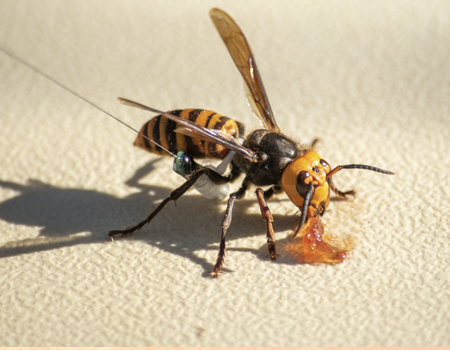 After weeks of searching, Washington State Department of Agriculture (WSDA) entomologists–—with some cutting-edge methods from USDA’s Plant Protection and Quarantine (PPQ)–—have located and eradicated the first Asian giant hornet (AGH) nest ever found in the United States. For months, WSDA had been trying to find the nest they knew must exist near Blaine, WA, because of AGH detections in the area. But finding the nest proved extremely challenging since the hornets build nests in forested areas, typically in an underground cavity.

Knowing a nest was somewhere in the Blaine area, WSDA scientists were racing against the clock to find it and protect local honey bee populations. That’s because in the late summer and early fall, AGHs can attack honey bee hives. The hornets kill all the adult bees and take the bee larvae and pupae back to their nest to feed their own brood. And there was another threat: A large and healthy nest could produce mated queens, which could create new nests in the following spring.

WSDA entomologists had a plan: Capture a live hornet, attach a radio transmitter tag, release it, and track the hornet back to its nest. But they faced many hurdles: Once they captured a live hornet, they needed to find a way to attach the radio tag securely without harming the hornet, receive a strong enough signal to track the tag, ensure adequate battery life for the operation, and move through rough terrain with the tracking equipment. That’s where PPQ’s Otis Pest Survey, Detection, and Exclusion Laboratory came in. 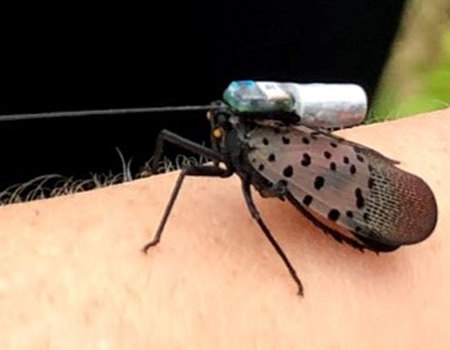 Otis Laboratory in Massachusetts had developed expertise in using radio tags on insects. “For two years, PPQ scientists have been attaching radio telemetry tags to the spotted lanternfly to study their movements,” said PPQ Entomologist Miriam Cooperband. “These invasive insects have been found in several East Coast states and can attack many tree species and crops. The tags worked well for us, and when we had some extras at the end of our field season, we were happy to offer them to our Washington state colleagues, along with the antenna, receiver, and tutorials.”

For spotted lanternfly, Cooperband used the smallest radio telemetry tag she could find—about as heavy as one third of a raisin. But how to attach the cylindrical tag to an insect? Should it go on the thorax or abdomen? On the top or bottom? What’s the tag’s center of gravity? Should the tag’s antenna face frontward or backward? Will it interfere with flight or walking? Will it get snagged on foliage?  What kind of glue works best on a bug? 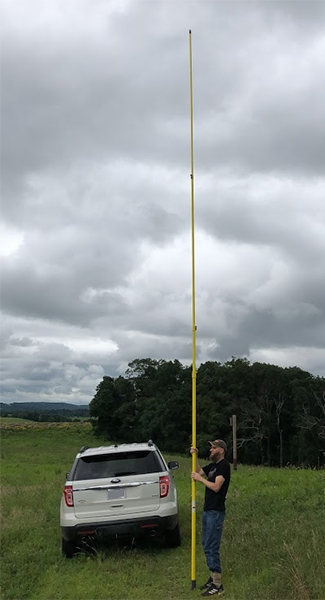 Years before, she collaborated with a chemist and entomologist from Eastern Mennonite University, Matthew Siderhurst. He tagged and tracked the fruit piercing moth in Australia and the coconut rhinoceros beetle in Guam, so she invited him to apply his expertise to the project.

“For spotted lanternfly, we tested both radio telemetry tags and harmonic radar technologies to determine which approach revealed the most about their travel distance,” Cooperband said. “We tried all kinds of fast-curing adhesives, including one that only cures in ultra-violet light. We eventually found that attaching the tag to the base of the thorax worked well, with the antenna facing backward.”

She was interested in learning how far these spotted lanternflies can fly over days and weeks, and that could include multiple flights throughout each day. “We had to consider that the tag’s added weight may reduce the insect’s flying range,” Cooperband said. “That’s why we also tested harmonic radar, which has much lighter tags but has a much shorter range of detection.”

Once a tagged insect flies off, someone must track it with a handheld antenna and receiver until they locate it again and record its new position. Although it can be labor intensive, Cooperband said the insights she gained may help PPQ better predict how spotted lanternfly might spread in the future. The tags have a range of 0.28 miles to 0.6 miles.

Using the Radio Tags to Track an Asian Giant Hornet

Using a radio telemetry tag from PPQ, WSDA entomologists tracked the hornet about 225 yards through the forest to a dead tree, but they didn’t see evidence of a ground nest. Then a few buzzing hornets got the attention of WSDA Managing Entomologist Sven-Erik Spichiger. He looked up and saw AGHs entering and leaving a crevice about 8 feet up in the tree. Nest found! Two days later, Spichiger and his team with a representative from PPQ plugged the nest with foam, wrapped the tree in plastic, and vacuumed out the adult hornets. To complete the eradication, they filled the nest with carbon dioxide to kill any remaining hornets. 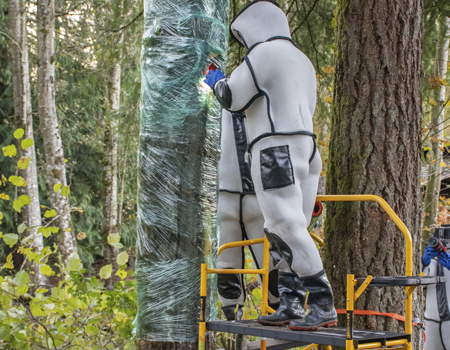 In a recent press conference, Spichiger noted that, given the radio tag’s strength, “I’m pretty confident as long as we can get live hornets, we can follow them back, and that really gives us a great tool in an overall eradication program.”

Now that they’ve shown that it’s possible to find and eradicate a nest, the hunt continues for any other nests that might be in the area.

The Magic of Science, Technology, and Relationships

PPQ continuously evaluates, adapts, and adopts the best available science, tools, and technologies to improve our plant protection methods. From the use of mobile data collection tools to molecular diagnostics (think nucleic acids, as in DNA- and RNA-based tests), these advances keep PPQ and its partners on the cutting edge in the fight against harmful plant pests and diseases.

At the same time, relationships are just as powerful. Cooperband had collaborated with WSDA’s Spichiger when he served with the Pennsylvania Department of Agriculture and worked with PPQ—including Cooperband—in the fight against the spotted lanternfly. When Spichiger moved to Washington, they exchanged ideas when the Asian giant hornet was first detected.

PPQ has formed many relationships in the fight against the Asian giant hornet. With WSDA, we share updates and technical expertise regularly, provide financial support, and collaborate on survey and research efforts.

PPQ has also been working with USDA’s Agricultural Research Service (ARS) and academia to conduct genetic research on the AGHs captured in Washington, along with specimens collected from various locations in Asia. This will help us determine if there were multiple introductions of the hornet into North America, and possibly their origin. Learning the AGH’s origin is important for discovering a potential pathway that could be better regulated, and for estimating how far this pest could spread in North America. ARS has also completed genome sequencing of the AGH this year and developed an AGH lure. It smells like sweet fermenting rotting fruit, which can be a food source for Asian giant hornets.

In addition, PPQ is sharing information we learn about this pest with the National Park Service, U.S. Forest Service, and Armed Forces Pest Management Board because all three agencies oversee Federal lands in the area.

"Entomology is a small world, and it’s crucial to develop, maintain, and strengthen working relationships,” Cooperband said. “It is great to continue to work with Sven since he joined WSDA. And we had already forged other relationships in WSDA based on other pest-related projects there. Plant protection benefits when we foster good working relationships, which facilitates communication and builds on past successes."