Plant Protection Today - A Pox on Our Stone Fruit—No More!

About
Latest Stories
Archives
A Pox on Our Stone Fruit—No More!

How PPQ and Our Partners Eradicated Plum Pox Virus

Just how big is America’s stone fruit industry? Its growers collectively tend 1.3 million acres of commercial orchards. Annually, their crops are worth $6.3 billion with an export value exceeding $5.4 billion. But two tiny enemies threatened this huge and prosperous industry: the microscopic plum pox virus (PPV), and the gnat-sized aphids that spread the virus from tree to tree.

USDA’s Plant Protection and Quarantine program (PPQ) and our partners vanquished this threat from the United States. On Oct. 17, in a ceremony in Washington, DC, Under Secretary Greg Ibach declared PPV disease eradicated from our country. In addition to industry, homeowners, plant enthusiasts, and wildlife will also reap the benefits of this eradication.

How it spreads: Aphids spread the virus by feeding on an infected tree and getting the virus in their mouthparts. Then they fly off and start feeding on PPV-free trees, infecting them with the virus. The disease can also spread when people transport infected nursery stock or graft infected buds onto healthy trees.

States with detections: The first detection was in Pennsylvania in 1999, with subsequent detections in 2006 in Michigan (one tree) and New York.

How We Did It: The Eradication Game Plan

In a plant health emergency, we need science in a hurry. PPQ’s Science and Technology (S&T) delivers it. S&T’s many critical contributions to the PPV eradication program included: 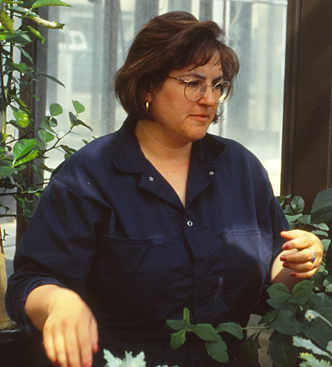 PPQ’s Laurene Levy, who passed away in 2017, played a crucial role in PPV’s eradication. When she worked for USDA’s Agricultural Research Service (ARS) in the 1990s, she recognized the U.S. stone fruit industry’s vulnerability to this disease. She applied her expertise in plant pathology to validate a molecular diagnostics PPV test. Scientists still use a modified version of her test today, and it is officially part of the International Plant Protection Convention’s PPV protocol.

After the first U.S. PPV detection in Pennsylvania in 1999, Levy led the scientific effort to combat the disease. She organized a large meeting of scientists from ARS and PPV-affected European countries, as well as stone fruit farmers.

“I am so happy Laurene lived to see plum pox eradicated from Pennsylvania, but I wish she could have celebrated the nationwide eradication with us in 2019,” said Vessela Mavrodieva, Assistant Laboratory Director of PPQ’s Beltsville lab and Levy’s close colleague and friend. “Laurene put so much energy into the program. She insisted on visiting farmers and talking to them one-on-one. PPV was her baby. I was so proud of our work, which made us feel like we were making a real difference.”

National Science Program Coordinator Don Seaver also saw Levy’s efforts as pivotal to PPV’s eradication. “Laurene helped develop the eradication strategy and, most importantly, convinced everyone eradication was possible,” he said. “This was not an easy sell, because eradication required destroying infected trees plus all stone fruit trees in a certain buffer area around it.”

From the beginning, the PPV eradication program was a cooperative effort among PPQ; State departments of agriculture in New York, Pennsylvania, and Michigan; the Tuscarora Nation; industry; academia; growers; and homeowners. Together, we carried out a coordinated program that included collecting and testing plant samples, removing diseased and suspect trees, and temporarily banning the planting of PPV-susceptible stone fruit varieties.

Working in cooperation, we eradicated the disease from Pennsylvania and Michigan in 2009 and western New York in 2012. In all affected States, PPQ surveyed residential properties, while the State departments of agriculture surveyed commercial orchards. In 2018, USDA and its cooperators completed 3 consecutive years of stone fruit field surveys in eastern New York with no further detections, putting eradication in our grasp.

“This was a time- and labor-intensive operation for PPQ Field Operations,” said Mafalda Weldon, Director of the Plum Pox Virus Eradication Program. “Our surveyors, many of them seasonal employees, had the delicate task of asking homeowners for access to their properties. Surveying meant going from tree to tree, collecting leaves from certain areas of each tree, and sending the samples in for testing.”

When the results were positive, more hard work followed. “They needed to coordinate the removal of infected trees, plus those trees in a buffer around the infected trees,” explained National Operations Manager Phillip Mason. “This was tough work, but we knew we could defeat this disease.”

The United Nations declared 2020 as the International Year of Plant Health (IYPH). This worldwide campaign is promoting the value of our precious plant resources and the need to safeguard them against invasive pests. To celebrate IYPH, each month Plant Protection Today will highlight how PPQ safeguards America’s agricultural and natural resources against invasive pests, and facilitates the safe trade of agricultural products. Read our article on IYPH to learn more—and how you can join this once-in-a-lifetime event!