Our country is under constant threat from foreign insects that would destroy our Nation’s crops and forests. These insects try to hitchhike in or on the commodities we import and the vessels that transport those commodities. But thanks to PPQ’s Offshore Mitigation and Exclusion Program, one pest—the Asian gypsy moth (AGM)—is finding it harder than ever to catch a ride to North America. Experts estimate that if AGM were to become established in the United States, it could alter our environment, change our urban and rural landscapes, and cause billions of dollars in losses and control costs.

Since 1991, PPQ and our counterparts in Canada have detected—and eradicated—AGM incursions more than 30 times in North America. The likely culprit: commercial ships that call on certain Far East ports when the moths are looking for smooth, well-lit surfaces—like vessel walls and cargo containers—on which to lay their eggs. 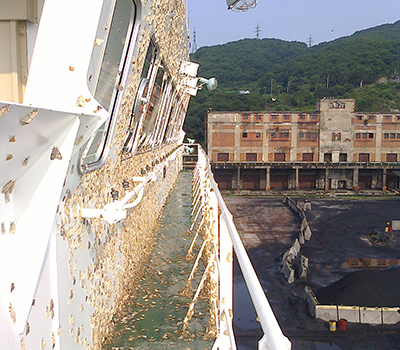 In the early 1990’s, PPQ experts had an idea: instead of fighting this pest in our country, why not take the fight to the source? And that’s just what PPQ did. Teaming up with the Canadian Food Inspection Agency (CFIA), PPQ established the Offshore Mitigation and Exclusion Program (OMEP) in 1993. The program created a new line of defense—on the other side of the Pacific Ocean—against AGM.

Through this innovative program, PPQ and CFIA experts work with the governments and maritime industries of Russia, China, Japan, and South Korea—countries where AGM is known to exist—to ensure U.S.- and Canada-bound ships are inspected and certified as AGM-free before departing. The program has three components:

Over the past 6 years, PPQ’s efforts have reduced by up to 98 percent the number of ships arriving in the United States from Asia with AGM egg masses. The program has also yielded a nearly 600 percent increase in compliance among maritime vessels arriving at U.S. ports of entry. As the adage says: an ounce of prevention is worth a pound of cure. In this case, an ounce of prevention is saving the United States billions of dollars in potential losses and control costs by keeping AGM out of our country.