Plant Protection Today - PPQ Deploys a High-Tech Tool to Keep Ralstonia Out of the U.S.

About
Latest Stories
Archives
PPQ Deploys a High-Tech Tool to Keep Ralstonia Out of the U.S. 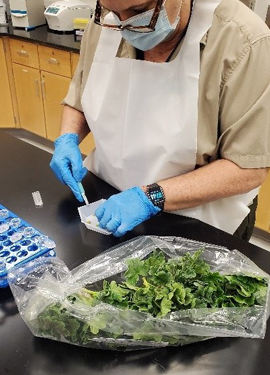 PPQ remains on high alert for a disease-causing microbe called Ralstonia solanacearum. In 2020, PPQ and 44 States launched an emergency response to successfully eradicate R. solanacearum from 650 nurseries. This pathogen threatens high-value U.S. nursery and specialty crop production. To help keep the disease out, PPQ recently deployed a new level of protection at our plant inspection stations: molecular diagnostics (MDx). Employing MDx at U.S. ports of entry is one of PPQ’s top strategic initiatives.

This new tool can rapidly detect R. solanacearum on imported geranium (Pelargonium) plant cuttings. “Although the cuttings come from APHIS-approved offshore growing facilities, they could be infected with the pathogen but show no visible signs of it during visual inspection,” said Molecular Biologist Aaron Kennedy. “That means the tool will help PPQ identify infected asymptomatic plants before they enter the United States, potentially avoiding costly recalls."

Race 3 biovar 2 of R. solanacearum affects affects a wide range of hosts, and geranium plants are a major one. It is a bacterial pathogen designated a “USDA Select Agent” under the Agriculture Bioterrorism Protection Act of 2002 because of its cold tolerance and potential to pose a severe threat to the domestic production of valuable crops, most notably potatoes and other solanaceous plants. 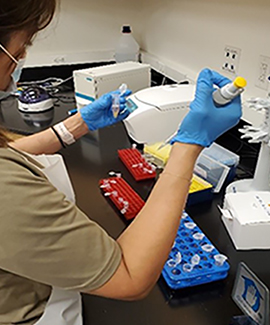 R. solanacearum can be transmitted through contaminated water, soil, and equipment, or by people’s inadvertent actions, such as transmission from hands and fingernails. Fortunately, it is not harmful to people or animals.

The emergency response in 2020 triggered a temporary shutdown of exports from the originating facility in Guatemala while APHIS officials determined the cause of the introduction. But years before the 2020 response, PPQ’s Molecular Diagnostics Working Group (MDWG) had already determined that imported geraniums were a high-risk commodity and therefore an excellent choice for rapid testing for R. solanacearum at PPQ’s plant inspection stations.

“September 27 finally arrived, the day we would begin testing for Ralstonia solanacearum,” said Supervisory PPQ Officer Joey Saad. “This day was a long time coming. A lot of my PPQ colleagues had put in many days, weeks, months, and years into this project. Our training and practice prepared us well to test the first geranium samples as we kicked off this new procedure at the Miami Plant Inspection Station.”

Saad noted that although everyone felt ready, they were still a little nervous. “However, once we started performing the test, everything seemed easier,” he said. "Thankfully, my team and I have completed Ralstonia testing on four shipments of geraniums to date."

PPQ tested geranium shipments from Guatemala and Mexico during the first week of implementation in late September. All plants tested negative. PPQ successfully coordinated the delivery of each shipment to the plant inspection station with a broker to ensure testing during the morning shift and rapid release of the commodity immediately thereafter, reducing potential downstream impacts to the industry’s supply chains.

Using advanced technology to detect harmful pathogens at our Plant Inspection Stations is the latest PPQ effort to safeguard U.S. agriculture and natural resources against invasive plant pests and diseases.