When Hurricane Maria thrashed the Caribbean island of Dominica last September, the storm killed dozens of people and devastated the country’s infrastructure. Adding to the misery, plant pest populations exploded after the storm passed. These insects included the Asian citrus psyllid, which spreads the citrus-killing disease Huanglongbing, also known as citrus greening. Because citrus is an economically important crop for the country, Dominica’s agriculture ministry reached out to USDA’s Plant Protection and Quarantine (PPQ) program for help. 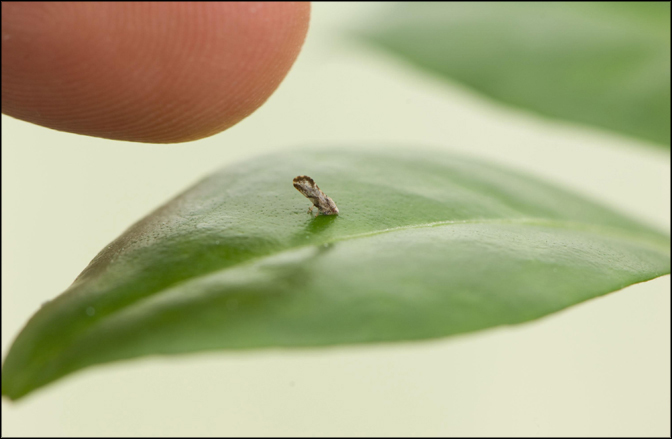 Citrus greening is one of the most serious citrus plant diseases in the world. Once a tree is infected, there is no cure. While the disease poses no threat to humans or animals, it has devastated millions of acres of citrus crops throughout the United States and around the world. Infected trees produce fruits that are green, misshapen and bitter, unsuitable for sale as fresh fruit or for juice. Most infected trees die within a few years.

Citrus greening is primarily spread by the Asian citrus psyllid—a small, gnat-sized insect that is no larger than the head of a pin. Once a psyllid picks up the bacterium that causes citrus greening, it carries the disease-causing pathogen for the rest of its life. An infected psyllid spreads the disease as it feeds on the leaves of citrus trees. People also help spread the disease further when they move infected plants.

Over the last few years, USDA has been investing millions of dollars in the research and development of effective tools for combatting citrus greening disease and Asian citrus psyllid. This includes developing and expanding methods for rearing and releasing biological controls—in this case, a stingless, parasitic wasp—to help reduce psyllid populations.

This wasp is showing great promise in the United States. In 2017 alone, USDA and its partners released 12 million wasps in citrus-producing states. Around some release sites, the wasps reduced Asian citrus psyllid populations by as much as 99 percent.

A Different Kind of Aid

And PPQ had a facility ready for this special effort. PPQ’s Mission, TX, lab rears millions of Asian citrus psyllid-killing wasps each year. Last year, they released nearly 927,000 in Texas and Louisiana to help control psyllid populations in those States. They also provided almost 853,000 of wasps to Mexico for release along the Texas and California borders. Fortunately, the lab had the capacity to also meet Dominica’s need.

The lab maintains 8 greenhouses that provide nearly 8,000 square feet of insect production space. There, scientists rear the small, stingless wasps and their host, Asian citrus psyllid. The adult female wasps lay their eggs beneath the immature psyllids. When the eggs hatch, the wasp larvae feed on the psyllids, eventually killing them.

“We carefully time production so that the insects in each greenhouse are at different life stages,” explained Supervisory Entomologist Dan Flores. “This ensures that we have a new group of wasps emerging every week.”

In April, the lab sent the first wasp shipment to Dominica. “We overnighted 9,000 wasps in 45 wide-mouth jars, each one containing 200 wasps. To keep them healthy in transit, we placed a strip of paper towel with honey and water in each jar, and we added chilled blankets to keep the shipment cool,” said Flores.

A plant health problem anywhere in the Caribbean is a threat to agricultural production not only in that region but also in the United States. “Our assistance to Dominica helps them deal with this threat locally, and it also allows us to proactively respond to emerging pest threats before they reach our shores,” Kohl noted.