(Cover Photo: PPQ scientists attach feather-weight tracking devices to spotted lanternflies to study their movements. Our scientists offered the technology to the Washington State Department of Agriculture, which used it locate an Asian giant hornet nest in their State in October 2020.) 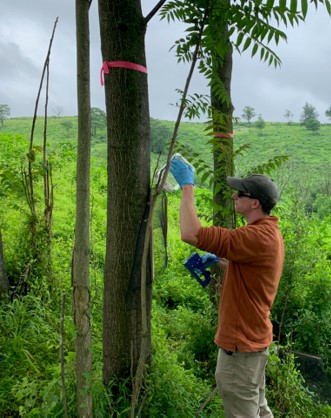 USDA’s Plant Protection and Quarantine (PPQ) program is kicking off a series of articles to highlight the cutting-edge work of our Science and Technology laboratories. Every day our scientists and technical professionals apply their expertise to safeguarding agriculture and facilitating safe trade. Since August is USDA’s Tree Check Month, first up is the Forest Pest Methods Laboratory (FPML), formerly known as the Otis Lab, located at Buzzards Bay, MA.

“Our lab develops tools to survey, detect, monitor, and control invasive plant pests, and regulatory treatments for commodities and materials like solid wood packing,” said FPML Director Scott Pfister. “Massachusetts is our primary location, and we also have field staff in California, Pennsylvania, Ohio, Michigan, and South Carolina—about 60 employees and cooperators in total.”

The FPML staff has delivered methods, expertise, and tools to benefit PPQ’s forest pest programs, including the gypsy moth, Asian longhorned beetle, and emerald ash borer. Today and for the last several years, the lab’s priority pest is spotted lanternfly (SLF). They provide support in four broad categories—attraction and behavior, trapping and survey, treatment development, and biological control—that has advanced PPQ’s understanding of the SLF, and helped shape the program’s evidence-based management strategies.

In addition, the team has a history of being proactive in advance of a pest emergency—case in point is PPQ’s box tree moth response. In 2019, when the horticulture industry and other stakeholders raised concerns about the moth, FPML scientist acted. “We established a research colony in the lab’s containment facility, initiated collaboration with European scientists, and began work on mating disruption trials,” Pfister said. “The science behind PPQ’s response effort is two years ahead of where we would have been if the team had been reactive instead of proactive.”

The lab’s new name is tied to a long history in forest pest response; however, staff also works with other serious pests. One in particular is the khapra beetle—one of the world’s most destructive pests of stored grain products and seeds. FPML’s Insect Containment Facility has the only khapra beetle colony in the country that is used to develop new treatment and trapping tools.

Another group of pests that scientists at our lab works with are tephritid fruit flies. The lab collaborates with the International Atomic Energy Agency (IAEA) in Seibersdorf, Austria, to support the PPQ Fruit Fly Program by developing phytosanitary treatment methods. The IAEA maintains colonies of fruit fly species from around the world, including species that are not currently available for study in the United States due to biosecurity concerns. FPML has used the IAEA colonies to evaluate cold treatments of citrus for oriental fruit fly (Bactrocera tau), and to assess the impact of modified atmosphere treatments in phytosanitary irradiation for spotted wing drosophila.

“Our facility is unique because of the staff,” Pfister notes. “We are a multidisciplinary group of scientists and technicians, which enables us to leverage our discoveries made in one area to benefit and influence research in another. This approach allows us to bring a full suite of expertise to emerging pest issues."