PPQ Closes in on the Asian Longhorned Beetle 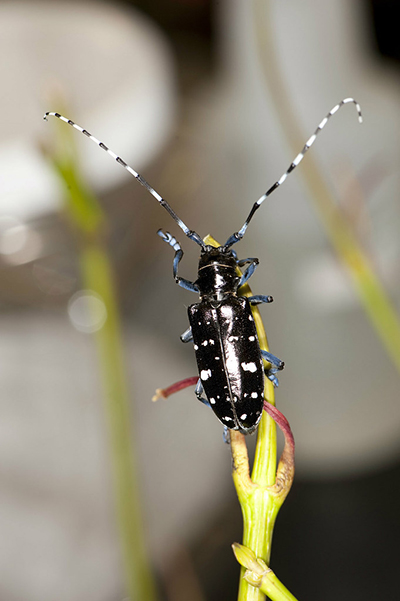 For more than 20 years, USDA’s Plant Protection and Quarantine (PPQ) program has fought to save America’s trees from a certain killer—the Asian longhorned beetle. Today, the battle continues, but the beetle is quickly losing ground.

A Strange-Looking Beetle Arrives in America

In August 1996, a Brooklyn, New York, resident noticed a showy, jet-black beetle. It sported white spots on its back and waved long antennas with alternating black and white bands. That discovery marked the first U.S. detection of the Asian longhorned beetle (ALB), a wood-boring invasive pest that normally lives in China and on the Korean peninsula. As ALB larvae chew deep into a tree’s heartwood, they disrupt the tree’s flow of water and nutrients, from its roots to its leafy canopy. When this disruption becomes severe, it kills the infested tree.

PPQ and New York State Department of Agriculture and Markets officials responded immediately. They knew that if this invasive insect became established in the United States, it would threaten forest resources valued at billions of dollars, along with the many industries those forests support—like timber, recreation, and maple syrup production.

“ALB likely arrived hidden in untreated wood packaging material like pallets and crates from China or Korea, before we had international standards for treating this material to prevent the spread of insects,” said ALB National Policy Manager Paul Chaloux. “The beetle feeds on numerous hardwood species, especially maple, but also ash, birch, elm, poplar, and willow, among others.”

Today, PPQ and our State partners are successfully battling ALB populations in Massachusetts, New York, and Ohio. We have already eradicated it from Illinois, New Jersey, portions of New York (Manhattan, Staten Island, and Islip), portions of Ohio (Stonelick and Monroe townships), and Boston, Massachusetts. PPQ expects to declare eradication this fall in all areas of New York City. Despite these successes, we have many years ahead of us before we can declare eradication nationwide.

People Can Spread this Slow-Moving Pest

ALBs are happy to live generation after generation on the same tree. As a result, infestations spread slowly—unless people give ALB a ride. People can accidentally move these beetles across continents and oceans, or State, county, and city borders 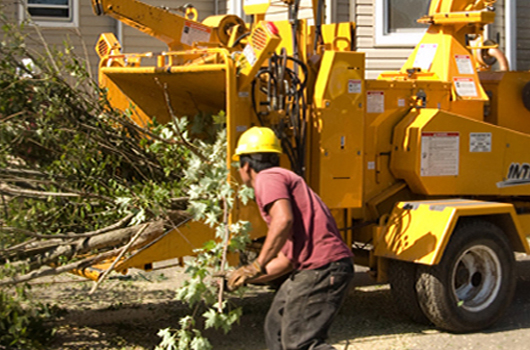 Public engagement is vital to achieving early identification. Interestingly, a member of the public—not a professional—has discovered every new ALB infestation.

The climbers use rope and safety gear to scale towering trees and, with the agility of acrobats, look at every square inch of every trunk and branch for signs of ALB infestation. Unfortunately, infestations usually begin in the treetops, the hardest part of the tree to see or reach.

In Massachusetts, New York, and Ohio, more than 180,000 trees have been removed to date. Firewood is always a wildcard; ALB can move vast distances riding inside untreated firewood.

Given all of these challenges, it’s no wonder the ALB Eradication Program has cost more than a $750 million over the last 22 years. Fortunately, that investment has already delivered many successes.

Certain aspects of ALB’s biology and behavior help PPQ eradicate the pest. Generation after generation often complete their life cycles on the same tree, so infestations expand slowly on their own. And fortunately, infestation signs are relatively easy to spot: egg sites, exit holes, frass (sawdust and excrement that larvae create as they tunnel through a tree), and canopy dieback.

Signs of the Asian longhorned beetle 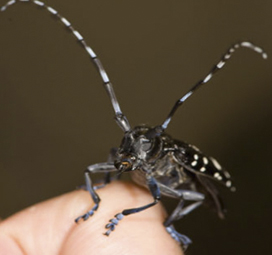 Adult beetles in the summer and early fall (these big insects—1 to 1.5 inches long—have black bodies with white spots and long antennas with black and white bands). 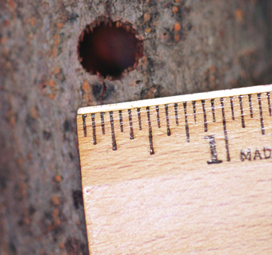 Round holes at least three-eighths of an inch in diameter. 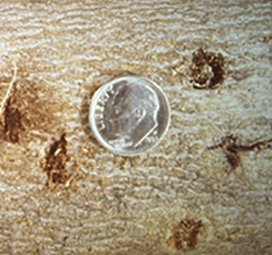 Pits on bark, chewed by the female beetle, where eggs are deposited. 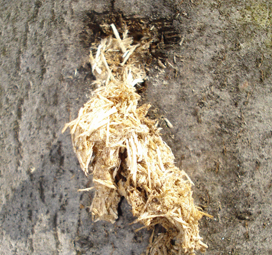 Accumulation of sawdust-like material (insect waste) around base of tree or branches. 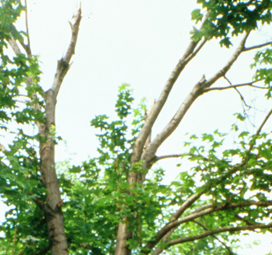 Dieback in the tree canopy or unseasonable change in leaf color.

PPQ’s Science and Technology (S&T) supports the program by developing methods to help eradicate ALB. For example, S&T’s studies determined that host tree debris must be chipped to less than 1 inch in any dimension to kill all ALB life stages. Chipping is now a critical part of our regulatory requirements for safely moving potentially infested material out of a quarantine area. In addition, S&T has explored:

Although these three methods have not yet become operational, they hold promise for improving the eradication program. 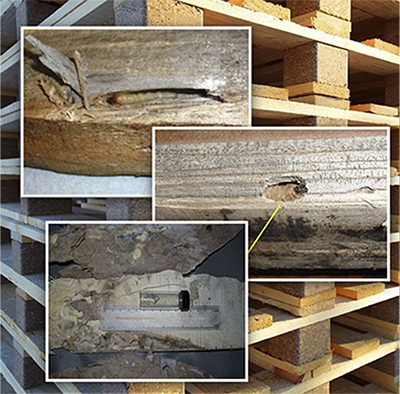 ALB isn’t the only tree pest that traveled to our country as a passenger inside WPM. The emerald ash borer also likely arrived via the WPM pathway and went on to kill more than 100 million U.S. ash trees. More than 1.6 billion wood pallets circulate across the Nation daily, and billions more circulate worldwide. That makes untreated WPM a staggering global problem for spreading wood-boring pests. Fortunately, the International Plant Protection Convention (IPPC)—an international agreement with 183 countries, including ours—offers a global solution.

With PPQ as a driving force, the IPPC adopted an international standard requiring WPM to be properly treated and marked with an official stamp before it can be moved in international commerce. Regionally, the North American Plant Protection Organization (NAPPO) helps other countries build their capacity to comply with the standard, known as International Standard for Phytosanitary Management 15. NAPPO provides training, best practices, and technical information throughout the Western Hemisphere. Since its implementation, U.S. interceptions of infested wood packaging material have gone down by as much as 52 percent.

Help Save America’s Trees from ALB!

Calling all tree lovers—August is Tree Check Month, and we are urging everyone to go outside and check their trees for signs of the Asian longhorned beetle (ALB).

Now’s the perfect time to develop habits that protect trees all year. It’s not hard. Just:

Remember: Even after August, you can still take these steps to protect America’s forests against the ALB!