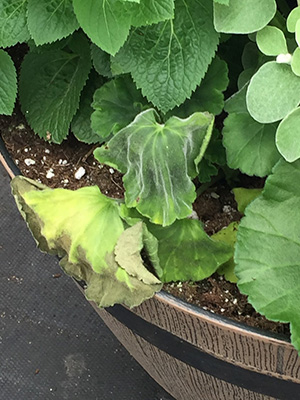 When Plant Protection and Quarantine (PPQ)—a division of the U.S. Department of Agriculture’s Animal and Plant Health Inspection Service—confirmed the detection of Ralstonia solanacearum race 3 biovar 2 in a U.S. greenhouse in April, it triggered a race against time to find, contain, and eradicate the pathogen that could threaten high-value nursery and specialty crop production. But unlike any plant health emergency before, PPQ had to respond to this plant health emergency while navigating the unprecedented COVID-19 pandemic. Thanks to the experience and resilience of our employees and partners around the country, we declared eradication of this pathogen just 2 months after it was detected.

A Wilting Start to the Spring Flower Season

In the first week of April, a Michigan greenhouse manager noticed unusual and excessive wilting on about 200 geraniums in his inventory. With the peak sales period just around the corner, he was eager to diagnose and fix the problem. So he took a leaf sample to Michigan State University’s Plant and Pest Diagnostics Laboratory—a member of USDA’s National Plant Diagnostic Network. There, the plant pathologist made a preliminary identification of R. solanacearum—a bacterial pathogen that can infect certain ornamental and vegetable crops like geranium, potato, and tomato.

R. solanacearum has many strains called races. USDA is particularly concerned about R. solanacearum race 3 biovar 2 because of its potential to cause serious harm to U.S. agriculture. Since only PPQ’s advanced molecular testing can determine the specific race and biovar, the plant pathologist safely transferred the sample to PPQ’s Beltsville Laboratory for additional analysis.

The day the sample arrived, the Beltsville Laboratory only had three employees on site due to COVID-19 restrictions. Fortunately, one was Molecular Biologist John Rascoe, who specializes in diagnostics for the R. solanacearum pathogen.

“When I opened the package from Michigan State University, I had no idea that this would be the first R. solanacearum race 3 biovar 2-positive sample that had been seen in the United States since 2004,” said Rascoe. “With so much at risk, I spent many intense hours testing and sequencing the sample to determine and verify the race and biovar.” 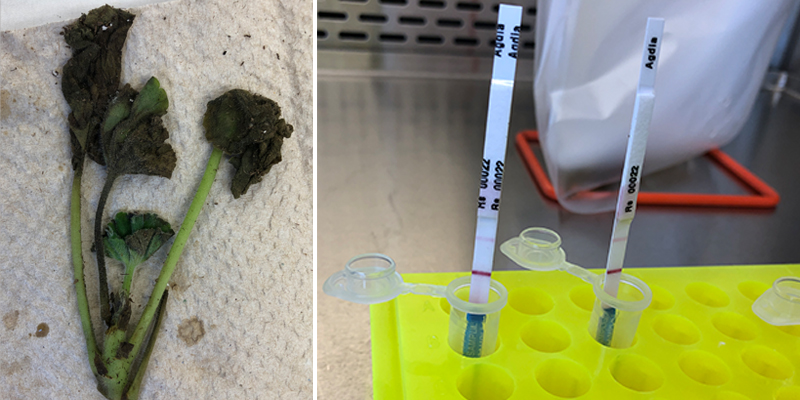 Given the stakes, PPQ began preparing for the worst even as the sample from Michigan State University was on its way to the Beltsville Laboratory. PPQ alerted the Federal Select Agent Program and pulled together a team to coordinate the emergency response, should one be needed. The team immediately started holding daily briefings with experts across PPQ and began mapping out a response plan.

“Although this was my first time coordinating an emergency response, PPQ has dealt with this pathogen before, so we knew what to do,” said Erin Otto, National Policy Manager and Emergency Response Coordinator. “And since we were looking at a potentially serious threat to U.S. specialty crops, we couldn’t wait to get started; we had to start right then and there.”

The team began laying the groundwork for an effective response. They started updating the Ralstonia response guidelines last used in 2004 when R. solanacearum race 3 biovar 2 was detected in geraniums in U.S. greenhouses. They also started talking about how they’d carry out the response despite travel restrictions, social distancing requirements, and other challenges the ongoing pandemic created.

When they received word on April 9 that the pathogen was R. solanacearum race 3 biovar 2, the team hit the ground running. Craig Kellogg, Michigan State Plant Health Director, issued an emergency action notification, placing a hold on the Michigan facility’s inventory. Carlos Martinez, Executive Director for PPQ’s Field Operations, deployed one of the agency’s Incident Management Teams (IMT) to support the response. And the response team started exploring how this pathogen made its way into the Michigan greenhouse.

Based on records obtained from the Michigan grower, the most likely source of the infection was a producer in Guatemala that exports geranium cuttings to the United States. Working with the importer, a U.S.-based horticultural company, PPQ identified 288 greenhouses in 39 States that received cuttings from the Guatemalan facility.

Over the next few weeks, State department of agriculture officials visited each location in coordination with PPQ field staff. They found, isolated, contained, and destroyed infected and exposed plants. They oversaw the cleaning and sanitation of each facility. And, they reviewed records from each facility, helping to identify other facilities that had received potentially infected cuttings or plants.

“We hit this response with every resource we had, including using inspection staff from all sections of our division. We had to move quickly to address the threat and also get the affected greenhouses back in business as soon as possible,” said Robin Rosenbaum, State Plant Regulatory Official with the Michigan Department of Agriculture and Rural Development. “COVID-19 restrictions made it difficult for our teams to get into the greenhouses at first. Despite these challenges, we were able to wrap up the initial response in Michigan in just 3 weeks’ time.”

Initially, the response focused on only one geranium variety, Fantasia Pink Flare. But as the investigation progressed, inspectors soon found infection in Fantasia Salmon geraniums. Eventually, PPQ expanded the response to include a subset of all U.S. greenhouses that received geranium plants of any variety from the Guatemalan nursery during the 2019-2020 shipping season.

“We went from 288 greenhouses to more than 650 potentially impacted facilities,” said Otto. “In total, PPQ field staff and State officials destroyed more than 621,000 infected and exposed plants to stop this pathogen in its tracks.”

As the scope of the response grew, so did the team to support it. Soon, the eradication effort involved every part of PPQ from Field Operations and Science and Technology, to Policy Management and the Office of the Deputy Administrator. It also involved the National Plant Board, State departments of agriculture in 44 States, and the U.S. horticulture industry’s national trade organization, AmericanHort. Click below to learn more about each group’s role.

According to everyone involved, one of the most challenging parts of this response was carrying out operations that adhered to all Federal, State, and local pandemic guidelines and restrictions.

“This was a fast-paced, intense response,” said Otto. “We faced a triple threat: a plant pathogen capable of causing serious harm to U.S. agriculture, a global health crisis that changed just everything about how we normally do our work, and a rapidly dwindling window for finding and destroying all of the potentially infected plants. Fortunately, we have dedicated employees and partners who never said, ‘We can’t.’ Instead, everyone came to the table with the attitude that we will find a way.”

Although the emergency response is over, PPQ continues to work with Guatemala’s national plant protection organization and the producer to determine the source of contamination. This is critical given the high volume of geranium cuttings the United States imports every year.

After the last incursion of this pathogen almost two decades ago, PPQ and the U.S. horticulture industry developed and implemented a certification program for imported geranium cuttings. The program requires specific clean-culture practices and regular testing. It also requires the national plant protection organization of the exporting country to certify every shipment and attest that the geraniums were tested and found free of R. solanacearum race 3 biovar 2.

“We were certainly surprised when we found out that race 3 biovar 2 was confirmed in a U.S. greenhouse. After all, it had been about 16 years since we have had an incursion of this pathogen,” said Craig Regglebrugge, Senior Vice President for Public Policy and Government Relations with AmericanHort. “The certification program that PPQ and industry jointly developed has been very effective, so clearly something went off track. With the growing importance of offshore-produced cuttings to our industry supply chain, it’s vital that we learn from this incident and emerge stronger and wiser.”

Once PPQ concludes its investigation, we will determine what, if any, changes should be made to the certification program to prevent future incursions of this pathogen. We also continue to strengthen overseas safeguards, improve diagnostics, increase treatment options, and continually assess pathways to better protect American agriculture from this and other high-consequence pests. 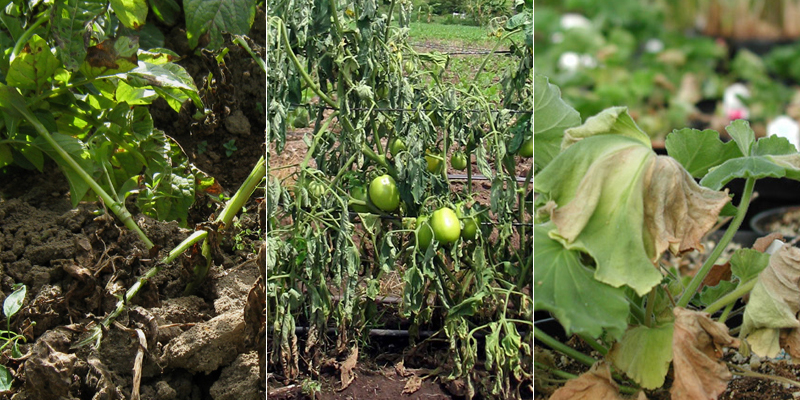 USDA considers R. solanacearum race 3 biovar 2 a pathogen of concern because of its potential to cause serious harm to U.S. agriculture. It causes plant diseases such as brown rot of potato, bacterial wilt of tomato and eggplant, and southern wilt of geranium. It can be transmitted through contaminated water, contaminated soil and equipment, or by people’s inadvertent actions. Fortunately, it is not harmful to people or animals.

PPQ has a history of successfully eradicating this pathogen from U.S. greenhouses. The last time it was detected in the United States was in 2004. That response involved 453 nurseries in 41 States. PPQ and partners destroyed approximately one million geranium plants to control and eradicate the disease.