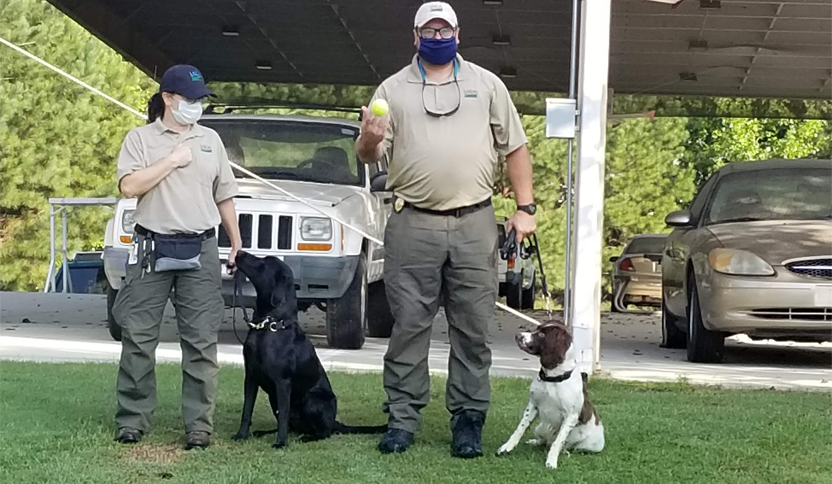 USDA's Plant Protection and Quarantine (PPQ) has been turning the acutely sensitive nose of dogs into high-tech plant health safeguarding tools. We have trained detector canines to sniff out specific pests and diseases, like giant African snail, coconut rhinoceros beetle, and Mexican fruit fly (MXFF) larvae. These dogs act like force multipliers, capable of conducting certain non-intrusive inspections more rapidly and efficiently than humans. That’s why detector canines are one of PPQ’s strategic initiatives for 2021.

“Our dogs can quickly determine a pest infestation’s boundaries and identify pest-free areas,” said Aaron Beaumont, Supervisory Training Specialist at PPQ’s National Detector Dog Training Center in Newnan, GA. “For example, when pest surveyors inspect citrus for Mexican fruit fly larvae, they must gather fruit, take it somewhere, cut it, and inspect it for larvae. Dogs can go in there much faster. They don’t need to gather or cut fruit, so we’re also removing a safety hazard. Of course, once they identify an infested area, we still need our surveyors to do more detailed delimiting work.”

PPQ-trained detector dogs have been instrumental in combatting the giant African snail in far southeastern Florida. They quickly identify areas as free of the snail or alert surveyors to infested areas where they need to focus their efforts.

“I encourage program and policy managers to reach out to me so we can discuss how detector dogs could help them,” he said. “If we determine their use is feasible, we could go to a State, conduct a pilot project, and see how well they can do. Everything we do at the center is data-driven. We can assist programs by providing efficient pest or disease detection and real-time data from the field.”

About two and a half years ago, PPQ decided to expand its detector dog team by adding two more Canine Handlers, who are also PPQ Officers. Mission accomplished: Meet Jennifer Taylor and Josh Moose. 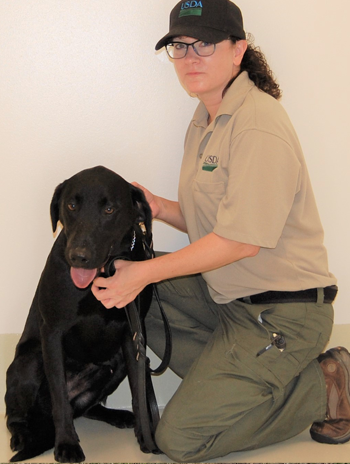 “I’ve been training dogs for 35 years, starting with my own pets who used to compete in official barn hunts, where they searched for rats in PVC tubes hidden among hay bales,” said PPQ Officer/Canine Handler Jennifer Taylor. “But I spent most of my professional time working for an international resort and entertainment company, where I trained and handled dogs that could detect bombs, rats, and bed bugs. I did that for 15 of my 22 years there. I spent the rest of the time as a zookeeper at a wild animal theme park.”

As a zookeeper she trained exotic species to come in and out of their exhibits or even get in position for medical tests. “I trained doves to land on a scale so we could weigh them, and Siberian tigers to turn and present their tails so a veterinarian could draw a blood sample,” Taylor said. “This helps them handle the stress that a visiting vet can sometimes cause.” 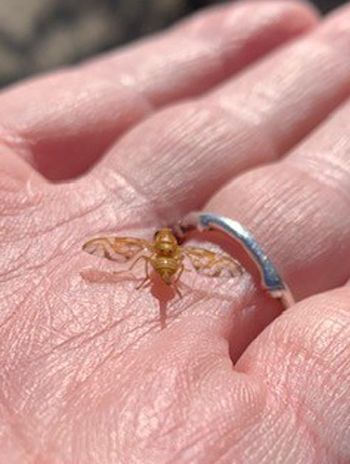 After 10 years of trying to join PPQ, her persistence finally paid off, and she celebrated her 1-year anniversary in May. As a PPQ Officer/Canine Handler, she spends 70 percent of her time training and handling dogs and 30 percent as a PPQ officer, monitoring pest traps, fumigating cargo, and carrying out administrative duties. Her job description notes she’ll be deployed 75 percent of the year, but during the COVID-19 pandemic she’s only been deployed for emergencies, like the MXFF outbreak in the lower Rio Grande Valley.

“This year, Josh Moose and I were using the dogs to survey for Mexican fruit fly larvae in Texas, and we were alternating 30-day shifts starting in January,” she said. “Then the winter freeze hit in February, which froze the fruit and halted our operation.”

Since then she’s been back at the center in Newnan, GA. “Right now, we’re in a building phase,” she explained. “We have six domestic program canines, and we need to maintain their skills. We’re hoping to start training new ones, and we have a few potential pilot projects in the works.”

Taylor notes that canines are excellent detection tools and can cover a lot of ground faster than people. They can handle terrain that’s hard for employees to access, so the level of efficiency and return on investment is high. The dogs are also excellent for public outreach and education.

“It’s easy to get people to cooperate after they’ve met a Labrador that licked their children affectionately,” she said. 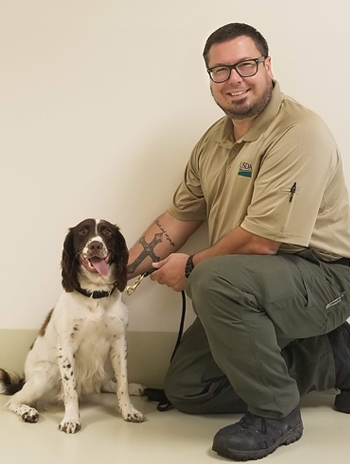 After his U.S. Marine Corps service, Moose went back to school to earn a degree in Wildlife and Fisheries Management and Forestry. He joined USDA’s Natural Resources Conservation Service through the Pathways Program. At NRCS, he tracked and mapped soil, plants, and wildlife and incorporated that data into site descriptions—without canine helpers. Then he saw PPQ’s Canine Handler job and applied.

“I was the first employee hired as a dual PPQ Officer and Canine Handler, and was the first person from the center to go through PPQ 101 training, plus the skill-specific training like fumigation and pest ID, followed by on-the-job training,” he said. “I took on the domestic Mexican fruit fly larvae program, writing standard operating procedures and policies. We got new dogs, Boe the black lab and Rudey the springer spaniel, and I did their initial training.” 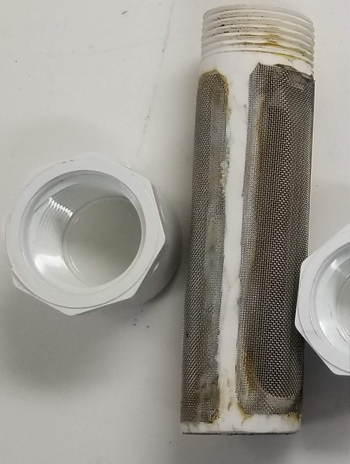 Moose went to Texas for 5 months straight. He researched how the dogs would need to be trained to support the program. He realized he must train the dogs to detect MXFF larvae and ensure they pass a proof-of-concept test with flying colors. “These dogs can easily find a single orange with two or three larvae inserted inside among 100 oranges,” he said. “Of course, any larvae we get at the center must be irradiated first and ship under a PPQ permit. In addition, we keep all the larvae in a special containment facility.”

In Texas, Moose was able to use live larvae—under permit—at PPQ’s Moore Air base facility in Edinburg. He kept them safely contained in a mesh tube of his own design (see photo). The dogs had no trouble finding the larvae.

Moose is also helping to train other dogs to detect the coconut rhinoceros beetle, an invasive pest in Hawaii that attacks coconut palms. Beaumont wants to certify dogs on two pests, but he cautions that the pests must be unlikely to infest the same areas. That would make the canine detection work very challenging.

Speaking of challenges, work in citrus groves have plenty, such as wind, sun, and heat, among others. “Out in the field, you can run into many hazards,” Moose said. “Wild animals, stray dogs, and sometimes areas we can’t enter. Once I was attacked by stray dogs when Rudey was still in the van. I was doing a walk-through to ensure there were no safety hazards for the canine, and I certainly found one. Fortunately, I wasn’t hurt, but you can’t be too vigilant.”