During the last decade, the United States has exported more than $1 trillion in agricultural products. With a projected value of $134 billion in 2017, our Nation’s farm exports continue to grow at a record-setting pace. These exports are energizing our country’s rural economy and strengthening our trade balance.

Sometimes U.S. exports are suspended or blocked from key markets by trade barriers such as overly restrictive or impractical requirements intended to minimize plant pest and disease risks. When this happens, U.S. producers turn to Plant Protection and Quarantine (PPQ) for help.

“We use the best available science, data, and international guidelines to strike down plant health trade barriers and clear the way for U.S. exports,” explained PPQ Director Andrea Simao. “Our scientists evaluate the pest risks associated with every commodity our country exports. They also identify practical measures that growers can take to keep pests from traveling with their products. Armed with this information, we head to the negotiating table to make the case for U.S. products.”

A Case in Point

When U.S. apple growers from Michigan, Pennsylvania, and New York wanted to gain access to the Israeli market last year, they reached out to PPQ for assistance. Israel allowed U.S. apples from the Pacific Northwest to be shipped to that country if they were cold treated in route to eliminate pests of concern. But the same option would not work for growers in the Eastern and Central United States because the shipping distance to Israel is considerably shorter, reducing the available time for in-transit cold treatment. So, PPQ went to work on a scientifically sound alternative: a shorter cold treatment protocol. Prepared with data and evidence that demonstrated the alternative treatment’s effectiveness, PPQ began the negotiation process with Israel. In the end, Israel agreed in January 2017 to accept apple shipments from Michigan, Pennsylvania, and New York using the shorter cold treatment schedule.

Last year, PPQ conducted 19 bilateral meetings with 16 countries to negotiate fair, practical, and effective requirements for the safe trade of live plants and fresh fruits and vegetables. The result for U.S. exporters: we opened new markets valued at more than $350 million, including sugar beet pulp pellets and California fresh strawberries to China, California fresh apricots and plums to Australia, and potatoes to Costa Rica. We expanded market access for all U.S. apple varieties to China, currently valued at $35 million, and chipping potatoes to Japan, worth an estimated $7 million. And, we retained access to key markets for U.S table grapes, citrus, apples, cherries, plums, and alfalfa hay valued at more than $4 billion.

“We take this work very seriously,” said PPQ Associate Director Mike Guidicipietro. “This is about helping America’s farmers and the people whose jobs rely on U.S. exports. They’re the reason we do this.” 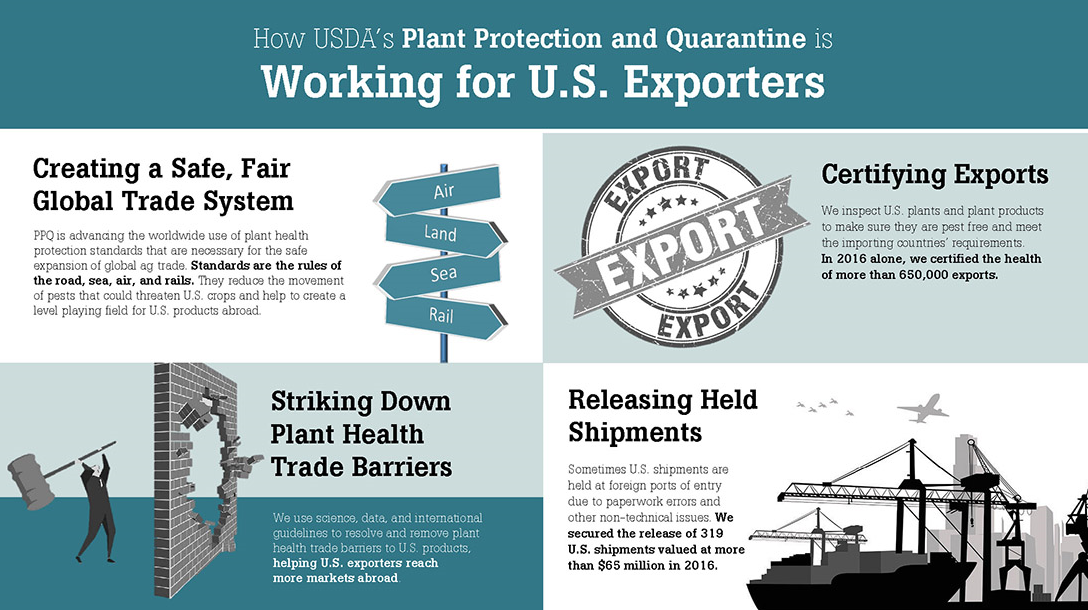 View 'How USDA's Plant Protection and Quarantine is Working for U.S. Exporters' infographic.