The Art and Science of Importing Ancient Living Masterpieces

A Gift from Japan

In 2011, Daizo Iwasaki, one of the world’s foremost bonsai collectors, passed away. Before his death, Iwasaki donated a number of world-class bonsai to the U.S. National Arborteum’s National Bonsai and Penjing Museum, including a revered white pine whose broad trunk nearly fills the container in which it stands.

Hoping to obtain a few more masterpieces for the Arboretum’s collection, then curator Jack Sustic traveled to Japan in 2015 to meet with Seiji Morimae, the well-known businessman and bonsai artist who was caring for Iwasaki’s collection. To Sustic’s delight, Morimae agreed to give the U.S. Arboretum three very special trees: a spectacular red pine with a massive trunk that gives it the appearance of great age, and two remarkable white pines, one of which had been grown from seed. This trait makes the now 80-year-old tree a rare and unusual specimen because most bonsai are collected from wild plants.

While Sustic intended to bring Iwasaki’s bonsai to Washington, DC, in 2016, the process moved in fits and starts. Each year, U.S. bonsai collectors have about four weeks in late March and early April when they can safely import bonsai. This small window of time coincides with weather conditions that are most favorable for the plant’s transition. “If you bring them too early or too late,” explained Scott Aker, Head of Horticulture and Education at the U.S. National Arboretum, “you risk exposing the plants to harsh conditions before they have a chance to fully adjust to their new environment."

But timing was just one complicating factor. The U.S. Department of Agriculture’s Animal and Plant Health Inspection Service (APHIS) prohibits imports of live plants in soil because soil could harbor a number of plant-attacking organisms that could threaten America’s agricultural and natural resources. APHIS also restricts certain artificially dwarfed trees. Because of their trunk size and age, they could carry potentially harmful pests and diseases that could threaten native tree species here in the United States. 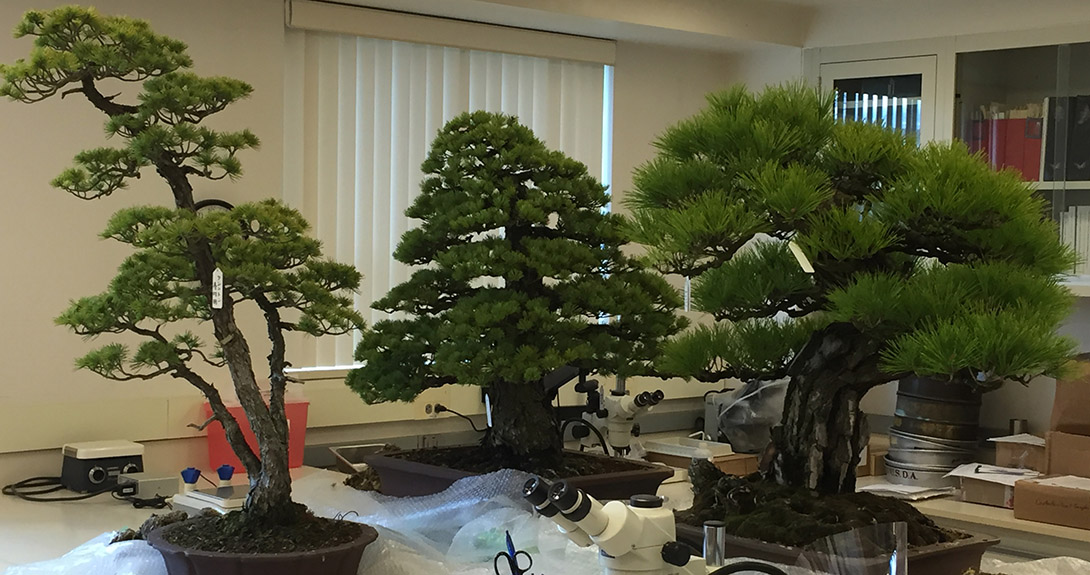 Knowing the challenges, Aker picked up where Sustic left off and requested permission from APHIS’ Plant Protection and Quarantine (PPQ) program to import the bonsai. PPQ Plant Pathologist Pauline Spaine worked closely with the Arboretum to identify safeguarding measures that would minimize potential pest risks without compromising the health of these fragile trees.

Satisfied that she and the Arboretum had a solid plan, Spaine issued a controlled import permit that detailed the specific conditions under which the Arboretum would import the otherwise prohibited plants. “We knew how difficult the journey would be for these ancient trees, so we devised a plan that would allow them to enter the United States with their soil intact,” explained Spaine. “This approach would give the trees the best possible start in this country.”

In 2011, PPQ improved its process for keeping out plants whose pest risk is high or not known. The improved process also facilitates the import of those plants that are known to present little or easily managed risks. Through this process, called “Not Authorized Pending Pest Risk Analysis” or NAPPRA, PPQ experts review scientific literature and examine plant import histories to systematically determine the risk presented by various plant species. If little is known about a particular species, it is placed on the NAPPRA list and prohibited entry into the United States until an importer requests a pest risk analysis.

Recognizing that researchers and others might need to import prohibited plant species for experimental, therapeutic, or developmental purposes, PPQ created the controlled import permit (CIP). This permit authorizes the holder to import small quantities of otherwise prohibited plants under stringent conditions designed to protect U.S. crops and ecosystems. Through the NAPPRA and CIP processes, PPQ is strengthening the United States safeguarding system while facilitating the safe trade of plants and plant products.

On April 4, 2017, the trees arrived by air freight at Dulles International Airport in Virginia. A truck transported the living masterpieces, packed in unassuming wood crates, to the National Plant Germplasm Inspection Station in Beltsville, Maryland. There, under PPQ supervision, experts from the Arboretum removed the trees’ original soil and delicately cleaned their roots. 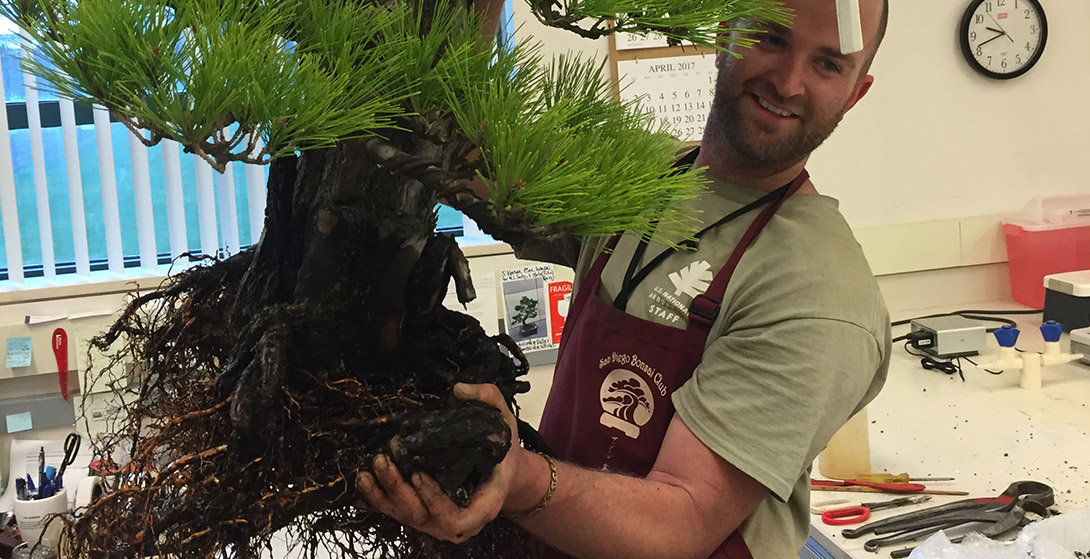 After thorough visual inspection by Paul Ijams, PPQ Officer in Charge, the Arboretum staff carefully repotted the plants in new soil specifically prepared for these special trees. Ijams and his team then sterilized the original soil before disposing of it, killing any organisms it may have contained. In total, the process of replacing the soil and inspecting the plants took about four days. “It was fascinating to watch the painstaking care the Arboretum staff took with each tree,” said Ijams. “We were honored to be part of the process.” 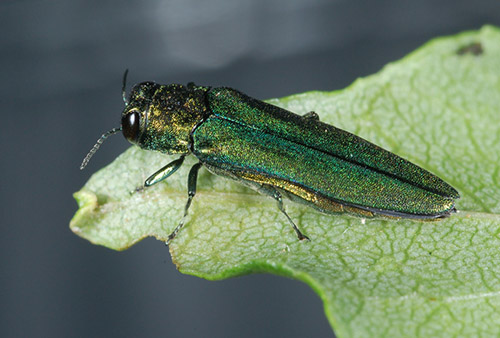 As a condition of import, PPQ requires the Arboretum to keep the trees in a screen house located in a secure area on the National Bonsai and Penjing Museum grounds. The 6- by 10-foot hoop-shaped screen house is covered in a fine-gauge mesh screen to contain small insects that might emerge from the trees. The structure also includes a vestibule designed to maintain a barrier between the trees and the outside environment. Before the trees could be placed in the screen house, it had to be inspected and approved by PPQ State Plant Health Director Matt Travis.

The tree-killing emerald ash borer (EAB) beetle taught Aker firsthand the damage invasive pests can cause. The EAB likely entered to the United States hidden in an untreated wooden pallet or crate from Asia, its native home. It was first detected in Michigan in 2002 and has since spread to 30 states and the District of Columbia. A few years ago, it spread to the Arboretum. The beetle is responsible for the loss of millions of ash trees across the country. “We have a number of extremely valuable trees on the Arboretum grounds, and we go to great lengths to protect them—and U.S. forests—from potentially harmful insects and disease,” Aker said.

The recently imported bonsai will remain in quarantine away from public view for the next two years. During this time, Arboretum staff will meticulously care for the trees and continuously scan them for signs of insects or disease. If they spot anything unusual, they will contact PPQ immediately. At the end of the two-year quarantine, Travis will conduct one last inspection before the trees are moved to a public viewing area in the Museum.

Advice for Researchers and Collectors

It might seem like a lot of red tape and hurdles to jump, but Aker understands the process is essential. “You have to understand how important it is to prevent the spread of invasive plant pests and disease,” said Aker. The Arboretum’s emerald ash borer infestation has forced the facility to invest many resources to control and manage it.

“Going through the process of getting a controlled import permit and setting up an approved containment unit are a minor inconvenience compared the alternative of dealing with an invasive pest,” Aker commented. His advice: start early, be patient, do your homework, and work closely with PPQ. He added, “Patience is a must for the bonsai master who waits and cultivates the trees in their time. Patience is also a must for the collector who has to balance the needs of the tree and the United States’ import requirements in order to grow his collection.”