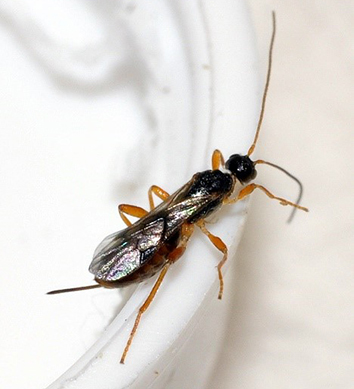 For 25 years, PPQ’s Asian longhorned beetle (ALB) eradication program has successfully battled back against the pest to significantly reduce its footprint. Our experts have established a solid response plan to eliminate the ALB and prevent its spread to other locations. Today, as part of PPQ’s ongoing efforts, our scientists are evaluating a biological control (biocontrol) agent—Ontsira mellipes—for its potential to attack and kill ALB larvae.

This stingless parasitoid wasp is native to North America, abundant, and widely distributed across the continent. Ontsira mellipes attacks larvae of native woodboring cerambycids (longhorned wood-boring beetles) and the ALB—a non-native cerambycid—in laboratory tests. For this reason, scientists are hopeful that the wasp can aid ALB eradication efforts. To prove it they have teed up biocontrol field studies in the ALB quarantine area in Worcester, MA.

PPQ’s Science and Technology researchers Juli Gould, Carrie Crook, Mandy Furtado, and Theresa Murphy are working with colleagues from USDA’s Agricultural Research Service (ARS), the University of Massachusetts Amherst, and PPQ’s ALB response team to evaluate Ontsira mellipes as an effective biological control agent. They will conduct their 18-week study off the beaten path on conservation property in woodlots where public usage is limited, and ALB quarantine regulations are in place.

“We’re already out in the field setting up our test and control plots,” Gould said. "Our research is two-fold. We will assess the potential for Ontsira mellipes to parasitize and reduce ALB populations in the field and show that ALB biological control can work in conjunction with current eradication efforts.”

For the study, researchers will place sentinel maple logs—embedded with 6 live ALB larvae each—into secure steel mesh cages. Then they will hang 3 cages in 3 maple trees (9 cages total) in the biocontrol release test plots and release 50 female parasitoid wasps onto the same trees. At the control test plots, researchers will follow the same protocol and schedule but will not release any wasps. After 2 weeks, the team will collect the caged sentinel logs from both plots and replace them with new ones. They will triple bag the caged logs before transporting them to a quarantine facility in PPQ’s Forest Pest Methods Laboratory located at Massachusetts’ Otis Air Force Base.

“Once the sentinel logs are in our secure quarantine facility, we will dissect them to determine the fate of all ALB larvae,” Gould explained. “They will either be alive, parasitized by Ontsira mellipes, or dead from other causes. We will also calculate the percentage of parasitism to determine whether the released parasitoids were able to find our ALB larvae and whether Ontsira mellipes occurs naturally in the Worcester area." 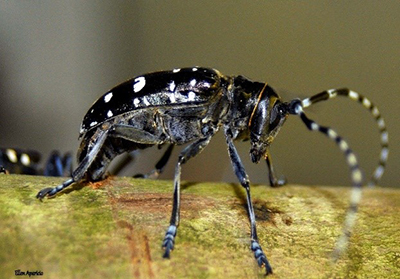 If scientists do prove Ontsira mellipes is an effective biocontrol agent for the ALB, it would provide the ALB staff with a new tool to use in sensitive areas where traditional eradication methods may not be suitable, and also in wetlands and rugged terrain inaccessible to the staff.

At the same time, foreign exploration for parasitoids that attack the ALB is ongoing in China and Korea. ARS researchers have collected one species in the genus Spathius and are rearing it in their Delaware laboratory. Next, they will conduct host-specificity testing to ensure that the parasitoid does not attack native cerambycid beetles.

August is the peak time of year to spot the ALB as adults emerge from trees. That’s why USDA is declaring August “Tree Check Month.” Checking trees for the beetle and the damage it causes is one way residents can protect their own trees and help USDA’s efforts to eliminate this beetle from the United States.
Complementary Content