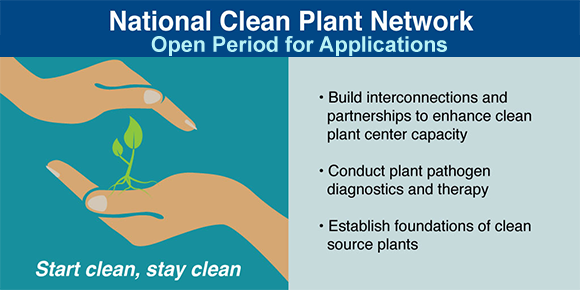 FY2020, APHIS is allocating $7 million to support 29 projects in 16 states and Puerto Rico.

The purpose of the NCPN is to protect plants of economic value by diagnosing for plant pathogens, curing those plants, and to protect starter plants and make them available to industry.

Cumulative highlights since 2014 include:

The Farm Bill—H.R. 6124 Food, Conservation, and Energy Act of 2008—became law in June 2008. Section 10202 directed the USDA Secretary of Agriculture to establish the “National Clean Plant Network” (NCPN), a program that organized a partnership of clean plant centers for diagnostic and pathogen elimination services to produce clean propagative plant material and maintain blocks of pathogen-tested plant materials in sites located throughout the United States. Clean plant material is made available to States for certified clean plant programs and to private nurseries and producers. In carrying out the NCPN, USDA consults with State departments of agriculture, land grant universities, and non-land-grant colleges of agriculture. To the extent practicable, and with appropriate State and industry input, NCPN uses existing Federal or State facilities as clean plant centers.  The program was reauthorized under the Agriculture Act of 2014 (commonly called the 2014 Farm Bill).  Section 10007 of the Farm Bill of 2014 combined the National Clean Plant Network (NCPN), formally Section 10202, with the Plant Pest and Disease Management and Disaster Prevention program, formally Section 10201, and provided additional funding for these two programs.  The 2014 Farm Bill made the NCPN a permanent program with dedicated funding.

The program is now codified under the Plant Protection Act Section 7721.

In FY 2009, NCPN supported 5 clean plant centers covering fruit trees and grapes.  The program expanded in FY 2010 to include more covering citrus, berries, and hops. The program repeated again in FY 2011 and 2012. Due to the lack of a Farm Bill in FY 2013, the program was unable to offer funding support that fiscal year. The program was reauthorized and made permanent under the Agriculture Act of 2014 (also known as the 2014 Farm Bill) and recodified under Plant Protection Act, Section 7721, paragraphs (e) and (g).  The program re-issued its NCPN Cooperative Agreement Request for Applications (RFA) in 2014, 2015, 2016, 2017, 2018 and 2019, expanding the program further to include support for sweet potatoes and roses as well as select special initiatives including planning, education/outreach, economics, data management, and quality control.

The concept for the Network began in November 2006 when representatives from the nursery industry, the grower community, the National Plant Board (NPB), other state regulatory agencies, the land-grant university system, and USDA formed a steering committee to review existing “clean plant programs,” prioritize a list of specialty crops for funding, and propose an NCPN implementation process.

USDA APHIS later sponsored a national workshop in Riverdale, Maryland, in May 2007 to implement the Network and introduce the concept to a broader stakeholder base. The workshop attendees developed the NCPN mission and vision statements as well as the draft strategic plan.

Presently, NCPN is a collaborative effort among three USDA agencies; the Animal and Plant Health Inspection Service (APHIS) for quarantine and regulatory programs, the Agricultural Research Service (ARS) for technology and germplasm issues, and the National Institute for Food and Agriculture (NIFA) for outreach and partnership initiatives. The Network is administered nationally by an 8 member NCPN Governing Board (NCPN-GB).

Purpose
To establish a network of clean plant centers for diagnostic and pathogen elimination services to produce clean propagative plant material and to maintain blocks of pathogen-tested plant material in sites located throughout the United States.

The stakeholder-driven National Clean Plant Network (NCPN) was created to protect U.S. specialty crops such as grapes, nuts, fruit trees, citrus and berries from the spread of economically harmful plant pests and diseases. For more information, visit the Stakeholder Driven NCPN website hosted by the University of California – Davis.