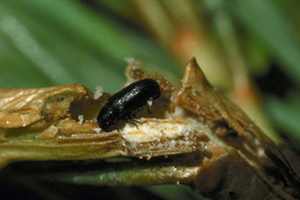 Pine shoot beetle (Tomicus piniperda L.) is a pest of pines that was first discovered in the United States in 1992. However, experts estimate that this pest has probably been in this country since the late 1950’s. Pine shoot beetle—which primarily attacks stressed or dying pine trees—has spread slowly throughout the North and Central United States, causing minimal damage to native pines, plantations and the nursery trade.