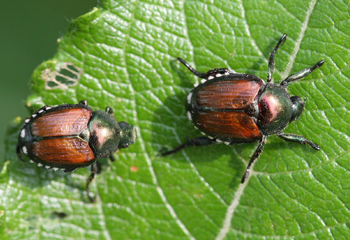 The Japanese beetle is a highly destructive plant pest that can be very difficult and expensive to control. Feeding on grass roots, Japanese beetle grubs damage lawns, golf courses, and pastures. Japanese beetle adults attack the foliage, flowers, or fruits of more than 300 different ornamental and agricultural plants.

Japanese beetles were first found in the United States in 1916 near Riverton, New Jersey. Since then Japanese beetles have spread throughout most states east of the Mississippi River. However, partial infestations also occur west of the Mississippi River in states such as Arkansas, Iowa, Kansas, Minnesota, Missouri, Nebraska, North Dakota, Oklahoma, and South Dakota.