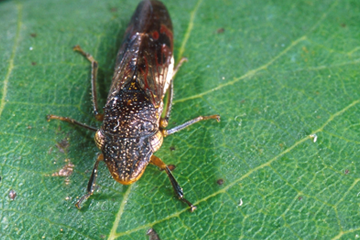 GWSS is native to the southeastern US and northeastern Mexico. PD, present in California for over 100 years, did not pose a severe threat to agriculture until the introduction of GWSS in the 1990’s. The biology, feeding habits, and large host range of GWSS make it more effective in transmitting PD than native insects. In 2000, APHIS issued a Declaration of Emergency to control and prevent the spread of GWSS and PD in California, and the California Department of Food and Agriculture (CDFA) organized the Pierce’s Disease Control Program (PDCP).

Xf is linked to many other plant diseases, including leaf scorch of almond, oleander, olive, and plum. Other diseases include Alfalfa Dwarf, Phony Peach Disease, and Citrus Variegated Chlorosis.In combination with an efficient vector such as GWSS, Xf is a significant risk to billions of dollars of agricultural production and cultural value.

Signs and Symptoms of Pierce’s Disease

PD causes chlorosis and scorching of leaves, undeveloped or shriveled fruit, and the death of the vine within 1-5 years.

The following symptoms indicate the presence of PD: 1) leaves are discolored, eventually decaying in concentric circles, 2) fruits are shriveled, and in clusters, 3) petiole remains attached to the cane when leaves fall, and 4) canes mature irregularly, producing patches of green, surrounded by mature brown bark.

The PDCP is implemented through cooperation between APHIS, CDFA, the California Agricultural Commissioners, the University of California, as well as other stakeholders.  The five components of the program are: 1) pest containment, 2) survey and detection, 3) rapid response, 4) outreach, and 5) research.  Pest management activities include nursery and citrus regulations, area-wide management programs, and biological controls releases.