With the current high level of interest within the horse industry regarding equine census estimates and potential disease movement, new methods for equine identification are rapidly being researched and developed. Many breed registries are either contemplating change or are in the process of changing the methods by which they identify horses. For that reason, specific breed requirements for identification are not listed here. Instead, this manual describes equine identification technologies currently available, in production in the United States, or in the late stages of development.

You should consider multiple technologies when you are either establishing or determining the unique identification of a horse. When shipping a horse interstate, APHIS recommends that the accredited veterinarian contact the State animal health officials of the State of destination to verify the specific identification requirements of the receiving State.

When shipping a horse internationally, the accredited veterinarian should contact the APHIS –VS District Office to determine the identification requirements of the receiving country.

Types of identification and background, technology, and usage Hot Iron or Fire Brand—

Background: Currently the most popular and computer compatible (this decade). Technology: Implantable transponder activated when interrogated by radio frequency readers; thus, such units are known as Radio Frequency Implantable Devices (RFIDs). RFID readers are used to identify and display transponders, alphanumeric characters. Microchips are implanted in the left nuchal ligament (the USDA- and FDA-approved anatomical implant site for all equids in the United States). The International Standards Organization (ISO) now brings all major electronic identification and RFID manufacturers to unified standards. Universal readers are available.

Usage: Many foreign breed registries in North America, all horses tested for EIA in the State of Louisiana, and many nonregistered equids.

Background: Future technology incorporated currently in several pilot studies. Technology: Electronic tool links any desired information to the equid’s unique identification and stores these data on an IC chip built into a device resembling credit card. The card, retained by the owner or other custodian, can be accessed only by persons using a second authorization card. These cards may be used in local management of the horse or herd by the owner, custodian, trainer, veterinarian, or other authorized person or may be connected via the Internet to regulatory agencies, breed associations, show offices, or other professional affiliates.

Background: Future technology based on 1994 patented technique in people. Technology: Iris “code” by “demodulation” of iris pattern (geometric structure) is done through complex mathematics. Benefits in equine applications are that the use of the portable digital camera for imaging is fast and noninvasive.

Background: New bovine–porcine technology attempts application to equine retina. Technology: Vascular pattern of retina is recorded uniquely by algorithm. Benefits in equine applications are that the use of the portable digital camera for imaging is fast and noninvasive; additionally, it is designed to include a global positioning satellite (GPS) receiver to allow automatic encryption of date, time, and location of image capture. Usage: None currently in equids.

Determination of equine coat colors can be a challenge even to experienced equine identifiers. The names of most colors used to describe equids are unique to the species and can be counterintuitive; even experts often disagree. Some breed registries recognize only  a limited number of colors; others are by definition limited to a single group of colors (e.g., Cleveland Bay). The best approach for equine identification is to use the basic terminology common among most breeds of horses, mules, or donkeys with a notation if the technical name of the color does not match the actual color observed. For example it may be appropriate to describe an older grey horse as “grey (appears almost white)” where possible.

Markings include patterns of white on the head and legs, hair whorls (cowlicks), scars, blemishes, and patterns of other colors superimposed on a base color. As determined by the purpose, white markings may be named, drawn in a picture, described in detail, or photographed.

When all possible modifications and variations are considered, there are dozens of named colors for equids. There is no single, standardized nomenclature for describing equine color and markings, and the inheritance of horse color is a science unto itself.

A summary at this level of detail will not be attempted here. Registry rules (which can be different between breeds), historical and cultural influences, and even regional differences within the United States all contribute to the difficulty in describing a single color-naming system. The objective of this section on equine identification is to explain the prevailing basic terminology that is useful for the identification of equids for animal health or regulatory purposes.

For identification, mules are usually described using the same terms as horses or using the ordinary names of colors. The traditional terms for describing the color of donkeys (includes burros and all asses) will be briefly described here, but they are also often described using the ordinary names of colors. There are a few good references on equine colors, and the reader is encouraged to review those works for a more detailed discussion of the subject.

The base color of horses occurs independently of any white superimposed on the underlying coat color. In addition to the white markings that may appear on the head or legs, white may appear on the body. When describing a horse’s color, it is important to recognize the “points” of a horse as black or not black whether or not white markings are present. The points are the mane, tail, lower legs, and ear rims and are as important to recognize as the base color to name a color properly. Foals are often born a different color than they will be as adults. The adult color often shows up around the eyes and on the face first. Usually foals shed out to their adult color around 2 months of age.

There are three primary base coat colors in horses: bay, chestnut, and black. These colors are modified by various factors (genes), including dilution factors, to produce a huge  variety of shades and specific color patterns. Brown (which some consider synonymous with dark bay) and sorrel (usually considered synonymous with, or a variation of,  chestnut) are also basic colors that can help to identify most horses. Common modifications of the base colors include the colors grey/gray and roan as well as the pinto and Appaloosa color patterns. Finally, there are a host of colors created by modification or dilution factors that are given distinct names. Those considered here include buckskin, dun, palomino, cremello, and white. APHIS –VS gratefully acknowledges the cooperation of The Jockey Club in allowing us to reproduce common head and leg marking figures.

Markings on light grey horses can best be seen by noting the underlying pink skin in the area of the marking. In the young horse, black hair predominates, but as the horse ages, the white hair increases and the markings tend to fade. A grey horse may have distinct white markings or faded markings and always a grey or black mane, tail, and legs.

Patterns Superimposed on Base Colors—

Dilution Modifications of Base Colors—

Some donkey colors are the same as those of horses; others are unique to the donkey. The points of a donkey are different from those of a horse. When describing the color of donkeys, “points” refer to the muzzle, eye rings, belly, and inside of the upper leg, which are almost always cream-colored. Cream-colored points may be called “white points” or “light points.” The color of a donkey’s points does not affect the name of the body color, but   points are usually described separately as light as opposed to dark, blue, or black points. The areas described as points in horses (mane, tail, ear rims) are called trim when describing donkey colors but have the same significance when naming colors.

Natural markings include patterns of white on the head and legs, hair whorls (cowlicks), scars, and blemishes. Many white markings on the head and legs have common terms in the horse world. As determined by the purpose, white markings may be simply named, drawn in a picture, described in detail, or photographed. White markings always have underlying pink skin, which is sometimes used to describe the exact margin of the marking (e.g., “ snip extending into left nostril”). Most markings are solid white, but they can be mixed with the base coat color. Leg markings are always named by the most proximal extent of the  marking on a given limb (fig 5). Leg markings may be described by naming the anatomic location of the most proximal extent of the marking (e.g., cannon) or using traditional terms (e.g., sock). The anatomic terms are preferred for identification purposes because not all breed registries agree on the lay terms.

Markings that have been produced after birth are considered acquired markings. Tattoos, brands, freeze marks, scars, and pin-firing marks are the most common examples. The location and shape of these marks are sometimes also described as markings. On plain- colored horses without natural white markings, these features can be very useful along with hair whorls to identify a horse. Other variations seen on the coat are not generally considered markings. Dapples are a repeating pattern of slightly darker and lighter hair in small circles. Dappling is most common on grey horses but may occur with any color. Dappling is not permanent but may vary in any particular individual with season, nutritional status, or physical condition. For this reason, dapples re not generally recorded for identification. Ticking is small spots of flocks of white hair often only consisting of several adjacent white hairs that can occur in the base coat. Ticking tends to increase with age. Ticking can generally be noted when identifying a horse, by the exact location and amount of ticking may change over time. 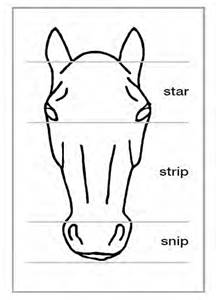 Figure 4—White markings on the head of equids are named according to their location. Many combinations of connected or disconnected markings are possible (e.g., “strip, snip” or “star, strip snip connected”). 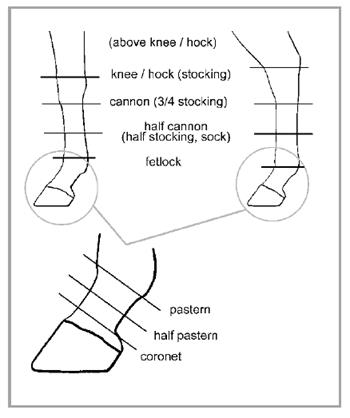 Figure 5—Leg markings are described by naming the most proximal extent of the white area on each limb.

Figure 6—The Bureau of Land Management (BLM) applies a unique angle-numeric freeze mark to the left side of the neck, under the mane, on each wild horse or burro it removes from the range.

Information on aging a horse by teeth using color photos is contained in Appendix G at the end of this Reference Guide.