Area/Zone definitions are an important component of any outbreak surveillance plan because they dictate which specific Area/Zone must be established as a result of the status of premises infection (e.g. infected premises versus at-risk premises) and the subsequent surveillance actions that must be performed. These guidelines may be used in surveillance planning for commercial operations as well as for backyard populations.

Define boundaries of each Area / Zone - The dimensions should be developed in collaboration with other parties involved in the outbreak such as the State Animal Health Official, Federal Assistant Director (AD), and Federal Area Emergency Coordinator (AEC).

Provide maps - If possible, consult with a GIS specialist to map actual boundaries. See the Map resources in this Toolbox for contact information and resources.

The primary outbreak surveillance disease Areas/Zones defined in the surveillance plan are the Control Area, Free Area, and Surveillance Zone (part of the Free Area).  The Control Area is further divided into an Infected Zone and a Buffer Zone. The Area/Zone sizes described below are specific to highly contagious diseases (HCDs), but can be used for other diseases as a starting point.

Area/Zone sizes for non-HCDs vary for each situation and depend upon input from collaborating parties. The dimensions should be developed in collaboration with other parties involved in the outbreak such as the State Animal Health Official, Federal Assistant Director (AD), and Federal Area Emergency Coordinator (EAC). See the Zones, Areas, and Premises Designations in Foreign Animal Disease Outbreak reference guide for more information on factors used to determine Control Area size.

In real-world situations, it may make more sense to establish Area/Zone boundaries along geopolitical lines, natural geographical features (e.g. along rivers or mountain ranges), or some other criteria that would not result in concentric rings. 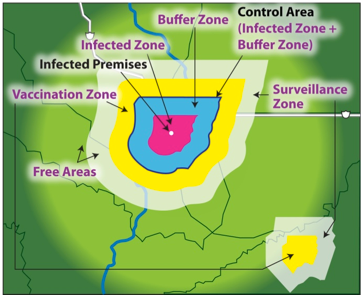 Premises Classifications in Each Area / Zone

The following table shows the premises classification types associated with each area or zone.

If there is a suspect or contact premises outside of the surveillance zone, a separate control area should be created that surrounds the premises.

The FA is an area in which the absence of the disease under consideration has been demonstrated by meeting requirements for “surveillance to demonstrate freedom from disease/infection” as specified in Chapter 1.4 of the OIE Terrestrial Animal Health Code 2017.

The PVZ is consistent with the (OIE) Terrestrial Animal Health Code 2017 definition for a Protection Zone. A Protection Zone is defined by the OIE as “a zone established to protect the health status of animals in a free country or free zone, from those in a country or zone of a different animal health status, using measures based on the epidemiology of the disease under consideration to prevent spread of the causative pathogenic agent into a free country or free zone. These measures may include, but are not limited to, vaccination, movement control and an intensified degree of surveillance.”