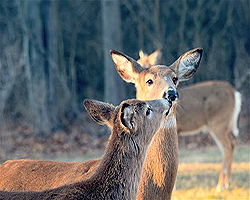 Recent research has suggested that plants can take infectious prions up into stems and leaves through the roots, however, this work was done in laboratory settings and it is unclear what happens under real-world conditions. More research needs to be done on this subject to better under-stand plant uptake and its signiﬁcance in disease transmission. 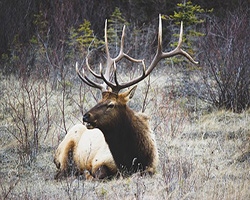 CWD enters the body either orally and/or intranasally and typically ends up in the lymph nodes of the head. Once inside the lymph nodes, the infectious prions proliferate, converting normal prion proteins to the misfolded form. From the head lymph nodes, the infectious prions make their way to the rest of body, including the lymphoid tis- sue around the rectum, and lastly the brain. It is important to note that infectious prion distribution can be different between deer and elk. In a percentage of elk, CWD is not detected in the head lymph nodes early in the disease, but it is detected in the brain. The incubation time of CWD is influenced by a number of factors such as dose, route of exposure, and the genetics of the animals. As a result, our general understanding of the CWD incubation period is informed by a combination of research studies where animals were dosed with infectious material, and by studies in which CWD negative animals were placed on CWD-infected sites.

The DNA sequence at regions of genes called codons, instructs the body as to which amino acids to synthesize to form a protein, which is a chain of amino acids. Differences in the prion protein gene at codon 96 in white-tailed deer, and codon 132 in elk have been shown to alter the rate of CWD proliferation, and as a consequence the incubation period of CWD, as well as our ability to detect the disease. White-tailed deer produce three possible combinations of amino acids at codon 96, two Glycines, a Glycine and a Serine, or two Serines. Elk produce either two Methionines, a Methionine and a Leucine, or two Leucines at codon 132. The combination present, referred to as the genotype, influences the progression of CWD.
No CWD-resistant genotype has been discovered. The distribution of these genotypes is significantly different between wild and farmed populations. In wild deer and elk the most common genotypes are GG and MM, respectively. This is not necessarily true for farmed cervids where animals are bred for physical traits.

Research has shown that regardless of genotype, animals are able to shed infectious prions in saliva, urine, and feces throughout most of the disease course. 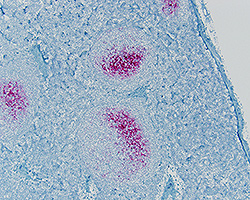 There are two approved tissue types for official CWD post mortem testing in cervids, the medial retropharyngeal lymph nodes (MRPLNs), and brainstem, also known as the obex. The MRPLNs are found in the head of cervids and lie under the back of the throat. Research has demonstrated that these lymph nodes contain infectious CWD prions early in the disease course. However, a percentage of CWD-positive elk are positive only in the brain early in the disease course. It is therefore essential to test both types of tissues for an accurate diagnosis.

Immunohistochemistry is a technique used to detect the deposition of infectious prions within tissues. Tissue samples are preserved in formalin and then thinly sliced so they can be viewed under a microscope. An antibody which binds to infectious prions, typically staining red or pink in color, is applied after a denaturation process to the thin tissue slices on a slide. Veterinary pathologists read the slide to look for the presence of staining in the appropriate region of the tissue.

The ELISA assay uses fresh, homogenized tissue to look for the presence of infectious prions. This assay also uses an antibody, but the staining is not visualized by a microscope. The intensity of the antibody binding is read by an instrument that assigns a numerical value amount of binding. Intensity values over a predetermined threshold indicate the presence of CWD prions. IHC is more commonly used for CWD detection in farmed cervids, and is considered the ‘gold standard’ as it confirms both the tissue type and degree of staining in the tissue. 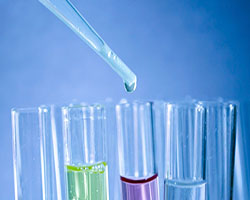 Chronic wasting disease or CWD is part of a group of diseases known as transmissible spongiform ecephalopathies (TSEs) which includes bovine spongiform encephalopathy (BSE) more commonly known as mad cow disease, scrapie in sheep, variant Creutzfeldt-Jakob disease (vCJD) in humans, and others. As far back as 1967 scientists suspected that proteins could be infectious agents, but it wasn’t until 1982 that Dr. Stanley Prusiner proposed that a misfolded protein, which he dubbed the prion (pronounced pree-on) protein, was responsible for TSEs instead of a bacterium or virus  as previously thought [1, 2]. The “Prion Hypothesis” and associated research ultimately resulted in the Nobel Prize for Prusiner. Since that time, a significant body of scientific research has been published which provides evidence supporting the hypothesis that the misfolded prion protein is the causative agent in TSEs. Highlights of that research are presented below.

The prion protein is a normal cellular protein coded by the PRNP gene. The protein can be found throughout the body of mammals, with the highest concentration in the central nervous system. In its normal shape, or conformation, it is not harmful and appears to facilitate a number of cellular functions. Disease is associated with a change in the shape of prion protein. Scientists discovered that the presence of the prion protein was essential for the development of TSEs [3-7]. Removing the PRNP gene (knocking it out) in transgenic mice and cattle prevents the disease [8, 9], while creating mutations within the PRNP gene can generate TSEs de novo [10].

Researchers have injected synthetic, artificially generated misfolded prions into mice and caused TSEs that were transmissible to other mice, demonstrating that the protein itself, and not other pathogens, was responsible for the infection [11-13].

Pathogens such as bacteria contain unique genetic information in the form of DNA or RNA.  Therefore, if bacterial pathogens were present in TSE-infected animals the DNA or RNA of those pathogens could be detected. Genetic evaluation of animals experimentally inoculated with TSEs in controlled laboratory conditions have not revealed the presence of bacterial DNA [14, 15].

The body recognizes viral and bacterial pathogens as invaders and activates the immune system in response to their presence.  There are two types of immune responses; the innate immune response which is characterized by fever and inflammation, and the adaptive immune response which is essentially the accumulated “memory” of previous exposures to a pathogen [16]. The latter response generates antibodies to quickly recognize and fight viral and bacterial invaders. TSEs do not trigger the activation of either type of these immune responses [17]. There is neither fever, nor antibodies generated in TSE infections. Considering that the prion protein is a normal cellular protein and the only difference between the normal and misfolded form is the shape, the body does not recognize it as a pathogen. This lack of recognition is responsible for the lack of classical immune responses.

TSEs are unusually resistant to inactivation. Standard bacterial and viral inactivation methods such as autoclaving, burning, radiation, and chemical treatments are ineffective against TSEs [18-20]. Most striking are their resistance to heat and radiation. In an incineration study, complete inactivation was not achieved until the material was burned at 1000֯ C (~1800֯ F) [18]. TSEs are generally impervious to gamma radiation, while bacteria and viruses are not. TSEs remained infectious after exposure to 200kGy of gamma radiation [21]. In comparison, chicken viscera can be sterilized with 20kGy of gamma radiation.

Due to their resistance to inactivation, TSEs are also extremely persistent in the environment. A farm that housed scrapie-infected sheep was found to still be contaminated with the disease 16 years after infected animals were removed [22].

With the development of an assay called protein misfolding cyclic amplification (PMCA), it is now possible to amplify minute amounts of TSE infectious material in the laboratory to a level that can be detected and infect animal models [23]. Viruses and bacteria cannot be amplified in such a manner.