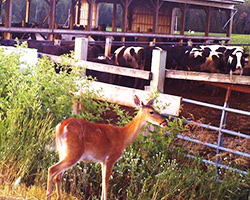 Tuberculosis (TB) ----2  is a contagious and zoonotic disease in animals and humans. It is caused by a gram positive, acid-fast bacterium that is a part of the Mycobacterium group that includes: Myco- bacterium bovis (bovine TB / bTB), M. avium (avian TB) , and M. tuberculosis. M. bovis can survive outside the host for several months, especially in cold, moist and dark conditions. Most spe- cies of farmed and free-ranging cervids are susceptible to bTB, including white-tailed deer, mule deer, elk, red deer, fallow deer and sika deer.

Tuberculosis can be transmitted by the inhalation of aerosols, by ingestion, or through breaks in the skin. In some deer, severe disease can develop within a few months, while in other deer it may take years to become symptomatic. Common symptoms may include progressive wasting, a low-grade fluctuating fever, weakness, and loss of appetite. Animals with pulmonary involvement usu- ally have a moist cough, rapid or difficult breathing, or. In the terminal stages, animals may be- come extremely emaciated and develop acute respiratory distress. In some animals, the retropha- ryngeal or other lymph nodes enlarge and may rupture and drain. Greatly enlarged lymph nodes can also obstruct blood vessels, airways, or the digestive tract. If the digestive tract is involved, intermittent diarrhea and constipation may be seen. Once clinical signs are apparent, death often occurs within 1 to 2 weeks.

Within the United States, APHIS regulates farmed/captive cervids under 9 CFR, part 77, subpart C and the bovine TB (bTB) Uniform Methods and Rules, 1999. The primary objective of the cervid bTB herd accreditation program is to eliminate M. bovis, the causative agent of bTB, in farmed/captive cervids.

Herds that participate in the APHIS Cervid bTB Herd Accreditation Program must test all cervids in the herd over 12 months of age, and have negative bTB results from two tests, in 9 to 15 month intervals, to establish an Accredited Free herd.  Non-natural additions of any age must also be tested on the same schedule.  The accreditation is valid for 33 to 39 months from the original anniversary date, and a negative whole herd retest must be performed in that period of time to maintain the accredited status. All farmed/captive cervids destined for interstate movement are required to be tested for bTB.

In the U.S., the bovine tuberculosis (bTB) status of captive cervids has been monitored primarily through individual animal or whole herd TB skin testing, and by voluntary inspection at slaughter.

Serological testing. The Dual Path Platform VetTB Assay (DPP) is approved as both the primary test and subsequent secondary test for official program testing to diagnose bTB in farmed and captive elk, red deer, white-tailed deer, fallow deer, and reindeer when the test is conducted at the National Veterinary Services Laboratories (NVSL).

If the primary DPP test on an animal is positive, the animal is classified as a suspect and that animal or herd is quarantined by the state, and a secondary DPP test may be done after 30 days. If the secondary DPP is negative, the animal is then deemed negative and released.  If the secondary DPP is once again positive, the animal is considered a ‘TB reactor’.  According to regulations, TB reactors must be depopulated and submitted for a diagnostic necropsy.  Lesions suggestive of TB, and specific lymph nodes are harvested and submitted to NVSL for analysis.  Histopathology of the tissues is performed, and if positive, a polymerase chain reaction (PCR) test is then done.  Tissues are submitted for culture whether the histopathology and PCR are negative or positive, and incubated for at least 60 days.  If the culture is positive for TB, the animal is infected and further testing of the herd must be done.  NVSL is now using a whole genome sequencing process and can identify if a particular TB organism is related to others in the library, and perhaps identify where it was transmitted from.