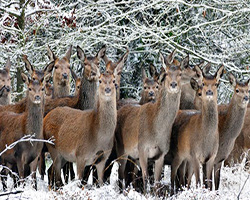 Brucellosis is a contagious disease of livestock and wildlife that has significant consequences for animal and public health and international trade. Bacteria of the genus Brucella cause the disease. Brucellosis occurs primarily in cattle, bison, and swine, although cervids, goats, sheep, and horses are also susceptible. In cattle and bison, the specific disease organism of concern is Brucella abortus (B. abortus).

USDA has cooperated with the livestock industry and State animal health authorities since 1934 to eliminate bovine brucellosis in the U.S. The national surveillance strategies implemented since then have proven successful in eradicating bovine brucellosis from the domestic cattle, bison in the U.S. with the exception of the Greater Yellowstone Area where brucellosis continues to be found in cattle and bison herds.   However, continued surveillance is needed to detect any possible reservoir, resurgence, or reintroduction of the disease and to prove to our trading partners that the U.S. is free of the disease in domestic livestock populations.