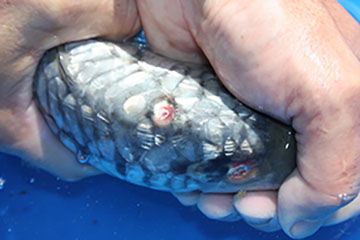 ISA is a viral disease that causes severe anemia in infected fish. It affects farmed Atlantic salmon in several areas of the world. APHIS works with fish health partners to help protect U.S. aquaculture and wild fish populations from this disease. The fish may develop pale gills, raised scales, pinpoint areas of bleeding, a bloated abdomen, or bulging eyes, and may swim close to the water surface. The disease can also develop without infected fish showing any external signs of illness—the fish maintain a normal appetite and then suddenly die. Because the signs of ISA are not unique and can occur with other fish diseases, testing for virus presence is the only way to tell if a fish has ISA.

Why is ISA a problem?

When ISA occurred in Maine in 2001 and 2002, 17 marine net-pen sites—containing about 1.5 million fish—were depopulated. The United States spent $8.6 million combating ISA in Maine between 2001 and 2007, including the cost of indemnity to farmers for animals destroyed. If ISA were found in the Pacific Northwest (U.S. or Canadian) the economic impact would be significant.

How can ISA be prevented and managed?

There are several simple steps that fish producers use to help prevent ISA virus from infecting their facilities. These basic biosecurity steps include the following:

In 2017 there were 528 total samples collected during 102 inspections at 13 sites. There were no net-pens confirmed positive for ISA this year. In fact, there have been no confirmed net-pens since February 2006. Biosecurity audits were conducted on active sites and vessels as could be scheduled during the calendar year. Several sites completed harvest and several were stocked in the spring with new smolts. Most sites remained Category 1* (presumed negative) throughout the year and were scheduled for monthly surveillance inspections. There was one Category 2 site identified late in the year with only one fish positive by one test. Per the ISA Program Standards, after 4 consecutive negative biweekly samplings, the site was reclassified as Category 1.

* Category definitions can be found in the ISAProgram Standards