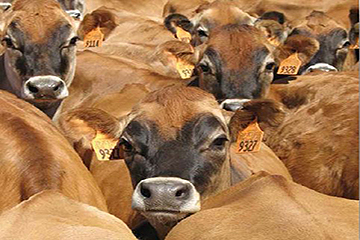 Brucellosis is a contagious, costly disease.  While most often found in ruminant animals (e.g., cattle, bison and cervids) and swine, brucellosis (also known as contagious abortion or Bang's disease) can affect other animals and is transmissible to humans. The disease is caused by a group of bacteria known scientifically as the genus Brucella. Three species of Brucella cause the most concern: B. abortus, principally affecting cattle, bison and cervids; B. suis, principally affecting swine and reindeer but also cattle and bison; and B. melitensis, principally affecting goats but not present in the United States.  For more information, see Facts About Brucellosis.

About the National Brucellosis Eradication Program

The goal of the National Brucellosis Eradication Program is nationwide eradication of brucellosis from domestic cattle and bison. At the inception of the Program, brucellosis was widespread throughout U.S. livestock. In 1956, there were 124,000 affected herds found by testing in the United States. Due in large part to this Program, by 1992 that number dropped to 700 herds, and the number of affected, domestic herds has declined to single digits since then. Annual losses from lowered milk production, aborted calves and pigs, and reduced breeding efficiency have decreased from more than $400 million in 1952 to less than $1 million today. Studies have shown that, if brucellosis eradication program efforts were stopped, the costs of producing beef and milk would increase by an estimated $80 million annually in less than ten years.

There is no effective way to detect infected animals by their appearance. The most obvious signs in pregnant animals are abortion or birth of weak calves. Milk production may be reduced from changes in the normal lactation period caused by abortions and delayed conceptions. Not all infected cows abort, but those that do usually abort between the fifth and seventh month of pregnancy. Infected cows usually abort once, but a percentage will abort during additional pregnancies, and calves born from later pregnancies may be weak and unhealthy. Calves from infected cows may have latent infections, i.e. infections that are not detected until they become pregnant, abort or give birth. Even though their calves may appear healthy, infected cows continue to harbor and discharge infectious organisms and should be regarded as dangerous sources of the disease. Other signs of brucellosis include an apparent lowering of fertility with poor conception rates, retained afterbirths with resulting uterine infections, and (occasionally) enlarged, arthritic joints.  For information regarding brucellosis infection in humans, please refer to the information provided by the Centers for Disease Control and Prevention.

How Brucellosis is Spread

Brucellosis is commonly transmitted to susceptible animals by direct contact with infected animals or with an environment contaminated by discharges from infected animals. As the disease primarily localizes in the udder and/or reproductive organs of cattle and bison, the milk, aborted fetuses, placental membranes and fluids, and other reproductive tract discharges of an infected animal are all highly contaminated with infectious Brucella organisms. Despite occasional exceptions, the general rule is that brucellosis is carried from one herd to another by an infected or exposed animal. The disease may also be spread when wild animals or animals from an affected herd mingle with brucellosis-free herds.

While there is no cure for brucellosis, it can be avoided by practicing proper sanitation methods and herd management strategies such as maintaining closed herds, recording individual animal identification and maintaining accurate records, isolating and testing new animals and those re-entering the herd, and arranging diagnostic workups and/or necropsies for exposed and potentially infected animals.  While signs of the disease may disappear, infected animals remain diseased and are dangerous sources of infection for other animals.

Prevention and the Eradication of Brucellosis

While the National Brucellosis Eradication Program continues to work towards this goal, the success of this Program depends on the support and participation of livestock producers. The basic approach has always been to vaccinate calves, test cattle and domestic bison for infection, and send infected animals to slaughter. Depopulation of herds, if funds are available, may be used if herds are severely affected. Identification of market animals for tracing, surveillance to find infected animals, investigation of affected herds, and vaccination of replacement calves in brucellosis-affected areas are important features of the current program. The Brucellosis Uniform Methods and Rules set forth the minimum standards for states to achieve eradication. States are designated brucellosis free when none of their cattle or bison is found to be infected for 12 consecutive months under an active surveillance program. (For a listing of state brucellosis classifications, see Status of Current Eradication Programs.)

What to do if you suspect Brucellosis in your herd

The biggest risk of brucellosis to livestock in the U.S. is wild elk and bison that harbor the disease in the Greater Yellowstone Area (GYA).  If livestock are exposed to aborted fetuses, or the tissues or discharges of infected wildlife, they may contract the disease.  This can occur when elk or bison abort or calve near where livestock graze or are fed. Introducing a brucellosis-exposed animal into a herd also poses a risk of introducing the disease into the herd; however this risk is also geographically associated with cattle herds around the GYA.

APHIS conducts surveillance on animals at slaughter by testing their blood for presence of Brucella antibodies. Around two million animals are tested annually.  Surveillance is more than sufficient to detect one affected herd out of 100,000 herds at a confidence level of 95%. Estimated prevalence is 0.002%.

Efforts to eradicate brucellosis caused by Brucella abortus in the United States began in 1934 as part of an economic recovery program to reduce the cattle population because of the Great Depression and concurrent severe drought conditions. A number of states saw this as an opportunity to reduce the level of brucellosis, which was the most significant livestock disease problem in the US at the time. In 1934 and 1935, the reactor rate in adult Cattle tested was 11.5%.

In 1954, the magnitude of the brucellosis problem in terms of economics to the cattle industry and human health prompted the United States Congress to appropriate funds for a comprehensive national effort to eradicate brucellosis. The brucellosis eradication program was designed as a cooperative effort between the federal government, the states, and livestock producers. National eradication in cattle was mostly achieved by the early 2000s, with now only an occasional spillover case in cattle in the GYA, but none elsewhere since 2010. 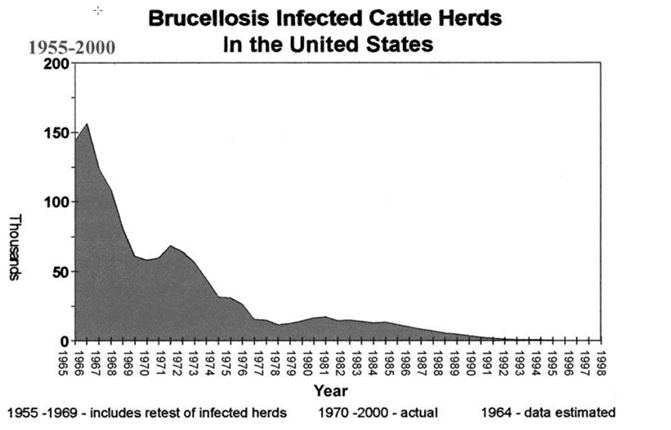