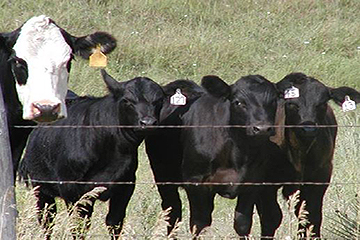 Bovine Spongiform Encephalopathy (BSE), widely referred to as “mad cow disease,” is a progressive and fatal neurologic disease of cattle. It is caused by an unconventional transmissible agent, an abnormal prion protein. BSE belongs to a family of diseases known as transmissible spongiform encephalopathies (TSEs) that includes scrapie in sheep and goats, chronic wasting disease in deer, elk and moose, and in humans, classic and variant Creutzfeldt-Jakob disease (CJD) among other syndromes. The prion agent is resistant to enzymatic breakdown and most disinfection treatments. Clinical signs in cattle include behavioral changes, coordination problems, weight loss and decreased milk production.

BSE, which is not contagious, exists in two forms: classical (C-type) and atypical (L-type or H-type).  The incubation period for classical BSE from time of infection, thought to occur early in life, until the onset of clinical signs averages three to six years.  The primary source of infection for classical BSE is feed contaminated with the infectious prion agent, such as meat-and-bone meal containing protein derived from rendered infected cattle. Regulations from the Food and Drug Administration (FDA) have prohibited the inclusion of mammalian protein in feed for cattle and other ruminants since 1997 and have also prohibited high risk tissue materials in all animal feed since 2009.

The atypical BSE forms, L-type and H-type, occur spontaneously at very low levels in all cattle populations, particularly in older cattle, usually eight years of age or older, and does not appear to be associated with contaminated feed. Bioassay data support the hypotheses that these strains are biologically distinct from classical BSE.  Like classic or sporadic CJD in humans, it seems to arise rarely and spontaneously.

BSE was first diagnosed in 1986 in the United Kingdom, which has had the vast majority of cases worldwide. However, the disease has been detected in many other countries, including six cases in the United States from 2003 to 2012. Of the six U.S. cases, the first was a case of classical BSE that was imported from Canada; the rest have been atypical BSE.

BSE presents a public health concern because occurrences of variant CJD in humans have been linked to the consumption of food containing ingredients derived from BSE-infected cattle.

The World Organisation for Animal Health (OIE) evaluates countries that submit a request and assigns a risk status for BSE based on the country’s history with the disease, the implementation and enforcement of their feed bans and their BSE surveillance.  In 2013, the U.S. status for BSE was upgraded to negligible risk, the highest status available.  In 2015, the OIE determined that atypical BSE occurred spontaneously at a low rate in all cattle populations and would be excluded for BSE risk.

Signs and Symptoms of BSE

Cattle affected by BSE experience progressive degeneration of the nervous system. Affected animals may display changes in temperament (nervousness or aggression), abnormal posture, incoordination and difficulty in rising, decreased milk production, or loss of condition without noticeable loss of appetite. There is no treatment or vaccine to prevent BSE. Following the onset of clinical signs, the animal’s condition deteriorates until it either dies or is destroyed. This process usually takes from two weeks to six months.

BSE is not a contagious disease and therefore is not spread through casual contact between cattle or with other species. The primary route of spread of classical BSE infection in cattle is feed contaminated with the infectious agent. Scientific evidence shows that feed contamination results from incorporating ingredients (for example, meat-and-bone meal) that contain protein derived from rendered infected cattle. Standard rendering processes do not completely inactivate the BSE agent. Therefore, rendered protein such as meat-and- bone meal derived from infected animals may contain the infectious agent. The preferred method for disposal of BSE-infected carcasses is alkaline digestion or complete, high- temperature incineration. Under no circumstances should BSE suspects be used for human or animal consumption.

Agricultural officials around the world have taken actions to eradicate or control the disease. These entail prohibiting the inclusion of mammalian meat-and-bone meal in animal feed; prohibiting the use of specified risk materials or SRMs (those tissues, e.g., brain and spinal cord, known to have the highest infectivity) in food, feed, or other products; and destroying animals showing signs of BSE and other animals at high risk of developing the disease. As a result of these actions, most notably the imposition of feed bans, the rate of newly reported cases of BSE around the world has decreased to less than 10 cases annually.

In 1997, the U.S. Food and Drug Administration (FDA) implemented regulations that prohibit the feeding of most mammalian proteins to ruminants, including cattle. This feed ban is the most important measure to prevent the transmission of disease to cattle.  In 2008, the ban was strengthened by prohibiting the inclusion of SRMs (brains and spinal cords from animals 30 months of age or older) in any animal feed. The 2008 rule also prohibits the use of all cattle carcasses not inspected and passed for human consumption, unless the cattle are less than 30 months of age, or the brains and spinal cords have been removed.

An ongoing, comprehensive interagency surveillance program for BSE has been in place in the U.S. since 1990. The program targets cattle populations with the highest probability of BSE detection, including animals with neurological symptoms consistent with BSE and cattle 30 months of age or older are that are non-ambulatory, recumbent, or unable to rise or walk without assistance. Because BSE, including atypical BSE, is exceedingly uncommon among U.S. cattle, the chosen targeted population will create intentional bias in the sample frame, which favors detection of disease.  APHIS also supports the FDA’s regulation prohibiting the use of most mammalian proteins in ruminant feed.

Because of the clinical history that can be obtained, samples collected on the farm from cattle exhibiting symptoms of central nervous system disease are particularly valuable to the BSE Ongoing Surveillance Program efforts in the U.S. Accredited veterinarians with proper training can play a key role in the sampling of these animals and should contact their VS field office for more information. BSE is a reportable disease. Any suspicious cases should be reported to the APHIS – VS District Oﬃce or the State animal health official as a suspected foreign animal disease (FAD).

The agent responsible for BSE has not been completely characterized.  There are a variety of theories regarding the nature of the agent. The most widely accepted is that disease is caused by an abnormal prion protein that accumulates in the central nervous system and causes the normal cellular version of the protein to change shape such that it can no longer be degraded by the cell, causing the protein to accumulate and damage the cell.

The BSE agent is extremely resistant to heat and to normal sterilization processes. It also does not evoke any detectable immune response or inflammatory reaction in host animals. In cattle naturally infected with BSE, evidence of disease has been found only in brain tissue, in the spinal cord, and in the retina. In experimentally infected cattle, the distal ileum, bone marrow, dorsal root ganglion, and trigeminal ganglion from experimentally infected cattle were also found to be infective.

In March 1996, the United Kingdom’s Spongiform Encephalopathy Advisory Committee (SEAC) announced the identification of 10 cases of variant Creutzfeldt-Jakob disease (vCJD) in people. These cases had a characteristic clinical and pathological phenotype that differed from other routinely diagnosed cases of classic (sporadic) CJD. SEAC concluded, and scientific evidence later confirmed, that these cases were linked to exposure to classical BSE before SRM bans were implemented. It is not known whether atypical forms of BSE (L- or H-type) are causally linked to forms of human prion diseases.

In the U.S., public or human health protective measures are maintained by both the Food Safety and Inspection Service (FSIS) and the FDA. The most important public health protective measure is the removal of SRMs from the human food supply. Other controls include banning non-ambulatory disabled cattle from the human food chain; prohibiting air-injection stunning of slaughter cattle; requiring additional process controls in advanced meat-recovery systems; and forbidding the use of mechanically separated meat in human food. Additionally, protection from BSE and other disease is achieved through antemortem inspection of slaughter cattle and the exclusion from slaughter of animals with any clinical signs of neurological disease or other abnormalities.

The U.S. also maintains import regulations, consistent with the OIE guidelines for BSE, to prevent BSE from entering the US through imports. Beginning in 1989, APHIS prohibited the importation of ruminants and most ruminant products from countries that had identified BSE in native cattle or that were at risk for BSE.  As more research was done to help define the disease, this research also provided scientific justification to outline ways to safely trade commodities to minimize the risk of disease.  This is reflected in the OIE guidelines for safe trade.  APHIS current import regulations are consistent with these guidelines and allow safe trade in many bovine commodities, including meat.

BSE was first diagnosed in the mid-1980s in Great Britain. BSE incidents have declined worldwide as countries have established control measures, such as feed bans.  The highest number of cases was reported in 1992, with more than 37,300, and there has been a continued reduction in detections of this disease annually since then, with fewer than 10 cases annually worldwide over the past 3 years.